Any festival is a great place to start discovering new music, meeting new friends and generally relaxing and enjoying yourself.

This is especially so when you go to some of the smaller stages. And that is where you can really find yourself standing with your mouth open at the amount of talent out there.

Such was the case with Stonewire on the Orange Amps stage at the Stone Free Festival as this eclectic looking band took their places and raised the odd eyebrow as people were wondering what this group was going to sound like. 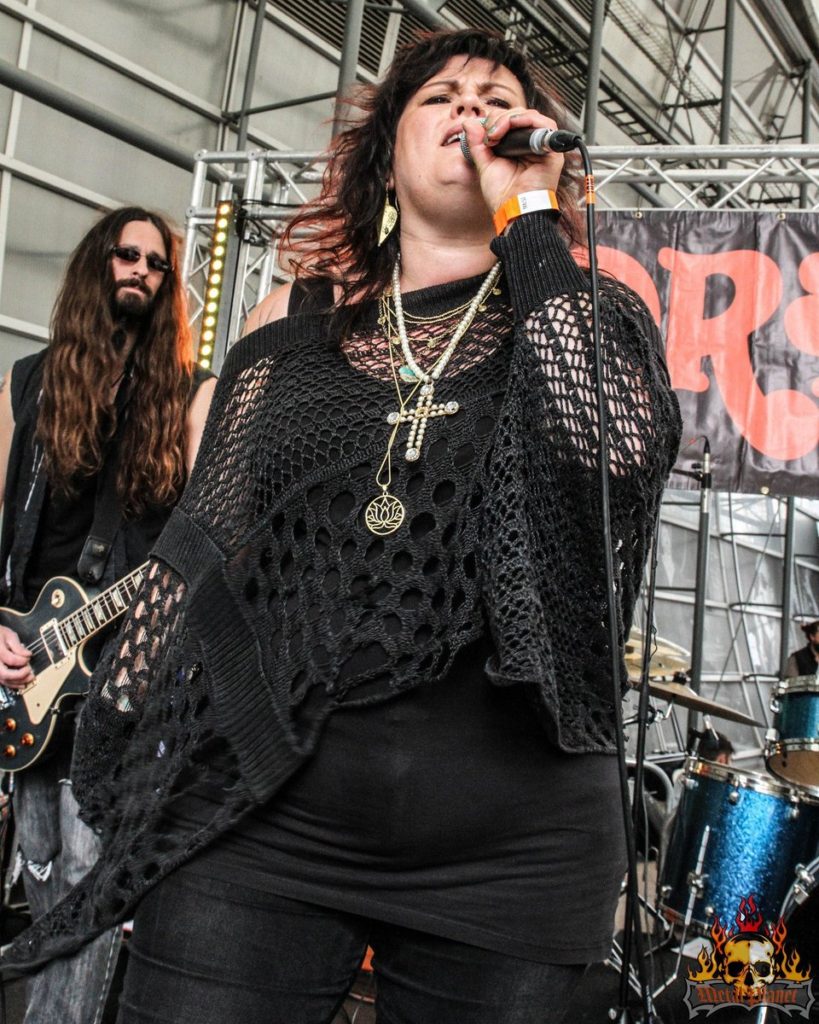 While Stonewire look like a combination of Black Sabbath, System of a Down, The Dead Daisies, and Genesis, my goodness, did this band rock out the Orange Amps stage with well timed hard blues whilst the singer, Sky Hunter, belting out her vocals with a punch that Alison Moyet would be jealous of.

Stonewire produce comprehensive hard rumbling guitar riffs alongside raw chucky bass and thundering drums and it just rolled through the crowd who had gathered. Feet were tapping and heads nodding in time, this was music that made it impossible to stand still. Sky’s powerful and commanding gravel filled vocals just grabbed everyone’s and pulled their attention inexorably to the stage. All attention was focussed on this very tight, professional hard blues rock group with its perfect soulful southern swagger.

They delivered a fantastic set with “Walk the line”, “One for the Road” and “FTM” which set the standard for what the audience could expect. And it is a high standard indeed. It was very plain to see that this band was very comfortable on the stage and with each other. Rather than the eclectic look taking away from the experience it really added to it once you started watching them perform.

On they went with the other three songs in their set “Southern Honey”, “When the Crow Flies” and “All That Matters”. The only criticism anyone could have with this set was it was too short. There was an imperceptible sigh of disappointment once the audience realised that was it. It is safe to say that Stonewire definitely won over many new fans who will be eager to find out more about this Kent based hard rock, headbang-worthy, blues band.

It is actually really difficult to describe what box to put them in as the sound, the rhythms, riffs and vocals all have so much familiarity when they are combined together. They sound as if you have taken out all your favourite blues, rock and metal bands, given them a dust down, and then smelted them all together only to find that the distilled result is Stonewire. They are truly exemplary in crossing rock boundaries but continue to have that very solid blues foundation on which to build each track. The emotional connection of the music and of Sky’s incredible passionate gritty contralto vocals leaves you in no doubt, Stonewire are something very special indeed. They are unquestionably a band to keep your eye on for the future and if you get even a sniff of a chance to see them, take that opportunity as you won’t be disappointed.