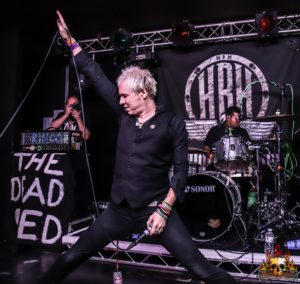 There’s nothing I admire more than seeing a upcoming group like event openers The Idol Dead tearing through a set like its Wembley stadium. Judging by the amount of people in attendance on this the smaller of the 2 stages this 5 piece have already gathered a healthy fan base with their energetic stage moves. “Clear lines” is a fine example of their punky attitude and is a major head rip roarer of a track and its over way too soon. With plenty of banter between artist and audience its the perfect curtain raiser to the weekend. With touches of The Cult, Motley Crue even the New York Dolls you couldn’t fail to raise a smile or be entertained. 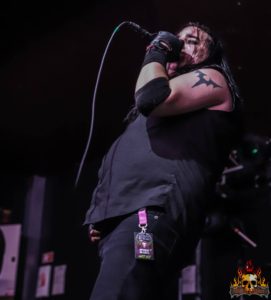 The sleazemeter goes up a notch or two with the arrival of Psychobabylon with vocals reminiscent of Vince Neil. Pounding drums and some very tasty guitar work thrown in for good measure all add up to a promising prospect. Man mountain vocalist “Rusty D” is where the eyes and ears are at with a set of pipes finer than a church organ. He’s not afraid to peel off a couple of death growls when the group down tune their playing especially on the rampaging “Angels” which the group announce they may never have played this track live before, seriously this begs the question why? Because to my ears this is far and away the stand out moment from the set. “Love and War” sways, growls and grunts with a typical LA Guns vibe a moment when fists were firmly in the air Transmission Vamps “Baby I Don’t Care” is covered brilliantly and with a bit of spicing up it went down well and the crowd reaction proved this to be a good choice of cover. 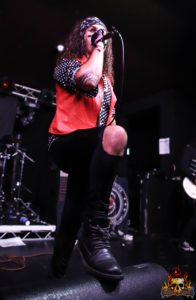 Staying on the 2nd stage next up was Speed Stroke decked out in tight jeans, bandanas all topped up with masses of swirling hair and stage moves a plenty with dirty filthy sleazy riffs sums up why so many people have gathered around the stage. Sometimes frantic sometimes less frantic nothing was going to stop “Speed Stroke” not even a broken bass drum pedal 3 songs in. When the group really hit top gear is when they find their AC/DC groove. With heavy heart I had to cut the set short as I had to dash over to the main stage but with barely 3 minutes left to achieve this I had to say goodbye to a bunch of guys who are a breath of fresh air and although the weekend has just started with 19 acts to follow I may well have witnessed the band of the weekend. 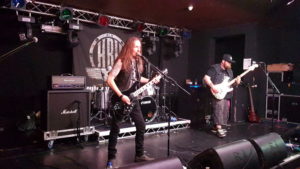 While many bands from all over the UK and further afield had rolled up to Sheffield to fill the air with rock and roll, Sheffield was not going to take this lying down, and to prove that point were three local lads taking the stage as Coyote Mad Seeds. And, boy did these guys show that Sheffield had what it takes to prove that Rock Ain’t Dead.  Even with an overlap with the Main stage, they held their own as quite a few punters thoroughly enjoyed a good, solid rock show as Joe, Chris and Rik fully earned the title of “Full Force Balls Out Rock ‘n’ Roll from Sheffield”. Pumping out good solid rock anthems like “Luck is For Losers” they energised a very receptive audience, endeared themselves as they ribbed each other and audience members before Joe came out onto the floor, ripping some solid riffs as he was provided some amber liquid refreshments. This was an entertaining fully engaged performance that left everyone feeling they had seen a rock show very worthy of being on the HRH stage.

Four unabashed rockers took the stage to let everyone know what the Senton Bombs were about and produced a great set that brought more punk energy to rock and roll. While it would have been great to see the full set, there is no physical way to be in two places at the one time. Only a few brief moments allowed me to get a glimpse into what these guys were about. It was loud and it was good! More than enough to give this reviewer a stabbing pang of guilt more time could not be given to hear the full set.

Over on the main stage was Midnite City and they have amassed enough interest to pack out the floor before them with a healthy sprinkle of support on the balcony. Not just a fine sleaze band but also respected for their melodic rock leanings. New single “Give Me Love” from their yet unreleased 2nd album goes down well and vocalist “Rob Wyldes” enthusiasm is evident as he dances and swings his arse all over the stage on this Bon Jovi sounding track. Personally watching “Midnite City” is the closest thing to heaven for me with Def Leppard licks, Danger Danger looks and Trixter moves, it sounds good and believe me it works perfectly. “Summer Of Our Lives” has always been a fan favourite and it comes over twice as good live than the studio version. The hour passes in a flash leaving a very contented hall behind them.

Standing centre stage with guitar slung low and a tasty look bowler hat on his head is the one and only Mark Valentine singer guitarist and all round entertainer, the band in question is The Last Great Dreamers a band with a chequered if long career who are receiving high praise indeed from wherever they perform. With a range of styles from 70s glam to green day infused riffs and The Wildhearts choruses the end result is lots of Dad dancing from the audience and people being grateful that miserable grunge has died a death. HRH have a radio station and “Sunshine” got to number 1 in the charts so lots of ‘thank you’ from Mr Valentine for the DJs that promoted the song. The track itself comes blasting out the speakers like a sonic boom and a small but friendly mosh pit coalesces in front of the stage. Special mention must go to Tigertailz bassist Berty Burton who was doing double shift this weekend but his duck walking antics on the stage even caught the attention of the miserable looking security guy and shock horror!! he smiled.

Imagine being placed in a time machine and transported back to 1984 (wouldn’t that be nice?) well Wildheart offer that opportunity for just the price of a concert ticket. Hailing from Belgium with a singer called Farty you would be fooled into thinking this is a million miles from the crazy Sunset Strip but be fooled no longer because this band is seriously the real deal. Talk about well thought out crafted songs with spine tingling riffs and elements of Dokken, Van Halen and Ratt you will get the picture. The confidence of these guys and the set is as tight as a drum. With the clock ticking down we get treated to Whitesnake’s Still Of The Night and a victorious full stop to a cracking live performance’

The moment for me has arrived after waiting for 35 years to witness Jetboy another band on my ever shrinking bucket list is now well and truly ticked off. The group have never played these shores before and main man “Mickey Finn” is just buzzing in his Union Jack Rolling Stones T shirt and is visibly stunned to be in the UK. “Rock n Roller” gives the opportunity for the harmonica to appear and in comes the boogie woogie with enough electricity to supply a City the size of Sheffield. Not content with resting up its head first into the slide guitar of “Bullfrog Pond” and its insane grooves. With Jet Boy they have been given the opportunity to record a new album and we are treated to a preview of first single “Born To Fly” and if this is anything to go on then this album could be a monster. This is as good as a comeback track your likely to hear for a very long time. The bass heavy thunderous riff of “Heavy Chevy” offers a slight departure in the Jetboy style and just proves they aren’t a one trick pony. With Mickey Finn falling to his knees and shaking his head like he’s possessed. New track “Beating The Odds” produces a deafening roar from the speakers and serious riffage of the highest order. This isn’t sleaze this is pure unashamed METAL. No Jetboy gig can be wrapped up without “Feel The Shake” a mish mash of grinding hips and Angus Young inspired guitar work made this historic “I was there” moment all the better. Mickey Finn has won 2 awards this weekend one for best Mohican and the other award is the happiest man in Sheffield.

Attendance was roughly 3400 and most seemed to be here for L.A. Guns so with no further hanging around “Diary Of A Madman” acted as the intro music before “Devil Made Me Do It” hits us straight between the eyes, from the very start guitarist Tracii Guns is on fire ripping the living daylights out of his 6 strings this man is admired around the world for his ability and you can understand why. Drummer “Shane Fitzgibbon” is a powerhouse and this is evident on “Electric Gypsy” anything less than accomplished musicians would never be backing Phil Lewis. Fourth song in, and out comes the Jimmy Page inspired bow and under a lone spotlight Tracii Guns cuts a Zeppelin flavoured solo before merging with the moody “Over The Edge” If ever a title of a song reflects the speed of the song then its the ball crunching “Speed” which has to be most filthiest song played on this the first day. With the set progressing before my very eyes I am well aware that I’m just watching Tracii and paying no attention to anything else, the man is from another universe!! The song that has stood the test of time better than most is “Ballad Of Jayne” this is LA Guns career highlight whether they like it or not. Watching Phil Lewis is spine tingling as he just croons his way through to the end and it’s a pleasure to be a witness.

“Rip And Tear” draws day One to a fitting conclusion with the punters spilling out on the street and with those with any stamina left to enjoy the rock disco while the curtain falls on a manic but highly enjoyable day.