What do all these bands have in common ? Revolution Saints, The Dead Daises, Whitesnake, Dio, Montrose, Kingdom Come, Slaughter, and finally Y+T ? well the four members of Burning Rain have all been involved in the before mentioned acts with,

Serving up some traditional classic sounding vintage rock with a modern sounding production. Formed way back in 1998 this is the fourth album in the BURNING RAIN library and following on from “EPIC OBSESSION” released in 2013, is a minor miracle seeing has how busy the band members are with their other projects. Album opener “REVOLUTION” with its swift guitar hello from “Doug Aldrich” breaks away into a bottom heavy stomper with all the group finding a almost funky groove and “Keith ST Johns” legendary vocals operating at all registers, with him spitting out lyrics such as “Dirty Dogs” and “Revolution” this is a solid start. “LORELEI” on the other hand I am a bit unsure of not because its a bad song but because its such a blatant copy of AEROSMITHS “Kings and Queens” which stands out like a sore thumb, although fine as it is I will move on quickly to track three.

“NASTY HUSSLE” has BLAS ELIAS rocking out behind the kit pounding away on this old fashioned rock n roll sounding track with a addictive chorus and lyrics about hot wheels and strutting that nasty hussle, marvellous old school heavy rock, not many bands out there can produce this level of classic sounding vintage genre rock. First single from this release “Midnight Train” all about wanting something so bad but you just cant have it and is a deeply tortured soul, the song writing is top drawer with the vocals sung in a different key and resembling a “Ricky Warwick” vibe. The drums on this song stand out as the main feature with “BLAS ELIAS” just going bat shit crazy, its easy to see why this was chosen as the first single as its short, snappy and contains an attention grabbing chorus. A gentle acoustic intro with solitary vocals and a distorted drum sound introduce “SHELTER” which it slowly gathers some aggression before descending back down into a mellow number but with the added bonus of “ALDRICHS” plugged in rumbling guitar weaving beautiful notes all over this intensely moody sweat drenched track. “FACE THE MUSIC” is all systems go with a banshee wail of a vocal and a swagger and class that would sit nicely on a “DEAD DAISIES” album, a happy feel good tempo that allows the guitarist to let rip with more fancy fretwork. Same with “ BEAUTIFUL ROAD” another unabated solid rock song this time adding a touch of hip slipping swagger and some “Robert Plant” baby baby stutters to spice this catchy track up a few notches, The reason this style of classic rock is still so popular after all these years is just the fact that it makes you feel so good and “HIT AND RUN” is a great example of how 4 musicians can plug in and create a true classic with ALDRICH even reverting to a touch of Chuck Berry rock n roll on the start of his guitar solo.

Wow !! you cant beat a bit of slide guitar to set the mood for a song “HIDEAWAY” is a change of mood completely with some nice shared backed up vocals and some moody segments that reminds me of a heavy blues / rock feel not a million miles from a Harlem Shuffle, So nice that “BURNING RAIN” are prepared to branch out from their comfort zone and 10 out of 10 for pulling it off which is a huge plus side to the album. Rounding “FACE THE MUSIC” off is “SINCE I’M LOVING YOU” and this really packs a punch in the heavy stakes with a rumbling bass from Brad Lang that feels like a earthquake rising up beneath you feet, and an evil vocal delivery, from the minute this song starts with a manic distorted guitar and some crazy tub thumping you know its going to be a bit special with all band members contributing to this almost hypnotic album closer.

In a nutshell what BURNING RAIN have created with album number 4 is very much the same as what they delivered in albums before, nothing that is going to set the world on fire, but more importantly is the fact they have offered the listener an escape from day to day life with a CD to blast out the car and make you feel damn good. Bands like this make me realise why I fell in love with rock music 4 decades ago, Thank you BURNING RAIN.

Review by Steve Bruty for metalplanetmusic 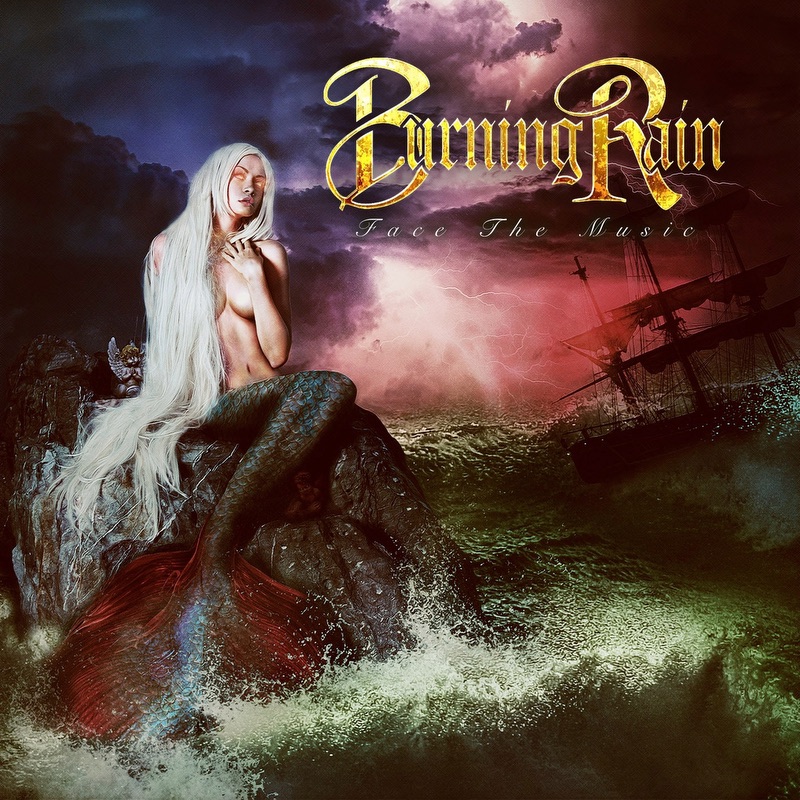