August 07, 2022
Trending Now
Home News THE WHO @ 52 CELEBRATING THE 50TH ANNIVERSARY OF TOMMY, AND THE WHO’S RETURN TO HEADLINE WEMBLEY STADIUM AFTER 40 YEARS

Iconic rock band The Who today announce the arrival of The Who @ 52, a pop-up shop located in the heart of Soho on Friday 14th and Saturday 15th June. Featuring an exhibition of rare and archive memorabilia, a global exclusive Pinball Wizard 7” vinyl will also be available, along with official merchandise, the new live album Tommy Orchestral, and an in-store exclusive ticket offer for the huge forthcoming Wembley Stadium show. Fans will also be invited to take part in the Pinball Wizard challenge, on our full-size retro Tommy pinball machine.

The Who @ 52 will mark The Who returning to headline Wembley Stadium after 40 years [Saturday 6 July 2019], and the release of The Who’s Tommy Orchestral, a live version performed with a full symphony orchestra last year to celebrate the 50th Anniversary of the seminal 1969 album. Located in the heart of Soho, The Who @ 52 will be open Friday 14th and Saturday 15th June from 10am to 6pm, at 52 Brewer Street, Soho, London W1F 9TQ.

The Who are one of the most influential rock bands of the 20th century. Their music provoked explosive change and spanned what many critics declare is rock’s most elastic creative spectrum, with Pete Townshend’s song writing moving between raw, prosaic, conceptual, and expressively literate. Their visionary sense of stagecraft headed by Roger Daltrey’s soaring vocal prowess is topped off by the band’s blistering rhythm section.

What’s in store for fans visiting the pop-up shop;

Tickets for The Who at Wembley Stadium on 6th July, with special guest Eddie Vedder and support from Kaiser Chiefs, Imelda May and Connor Selby are on sale now at https://www.livenation.co.uk/artist/the-who-tickets

The Who’s Tommy Orchestral, the new live album performed by Roger Daltrey with members of The Who band and The Budapest Scoring Orchestra, is out on CD and heavyweight gatefold vinyl on Friday 14th June, and available to pre-order now https://rogerdaltrey.lnk.to/Tommy

The Who @ 52 is proudly presented in association with Soho Music Month. 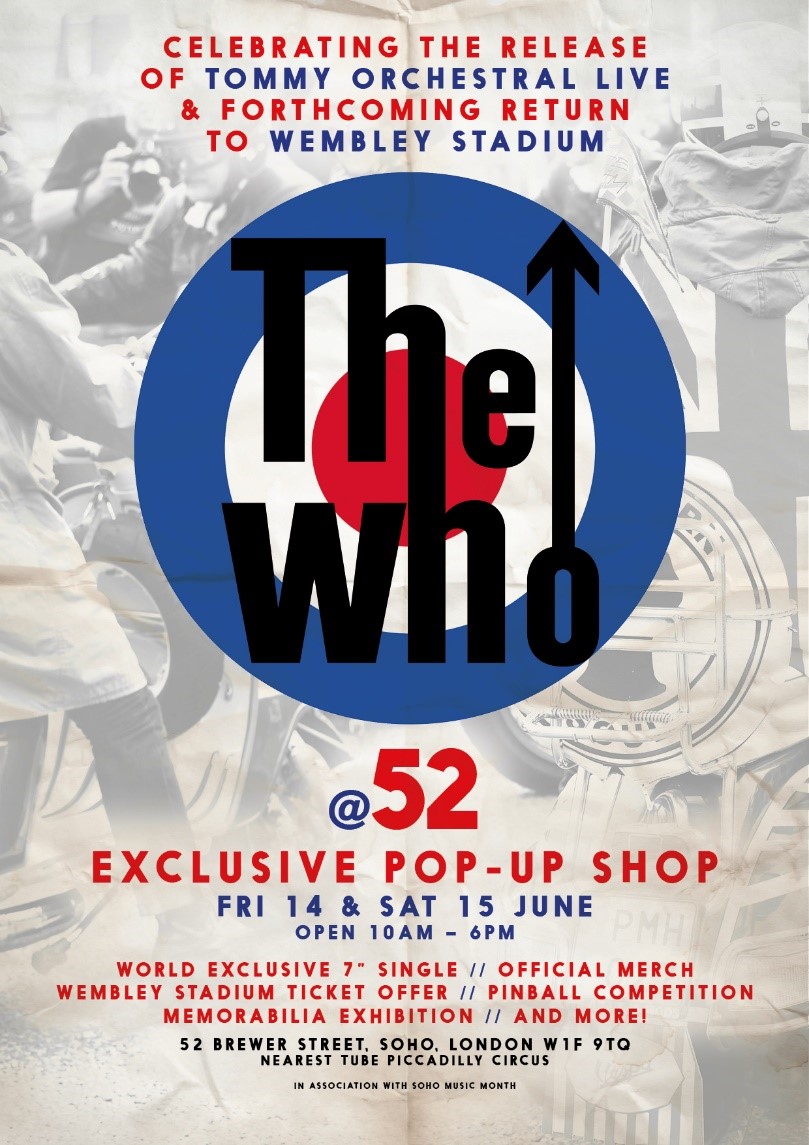