Bad Wolves exploded onto the rock music scene in 2018. The USA five piece’smusic standing confidently at a crossroads between anthemic hard rock infectiousness and thought provoking technically charged heavy metal. Think a cross between the mind numbing musical malevolence of Meshuggah and Sevendust’s timeless irresistibility and you’re halfway there.

The vision of ex-DevilDriver co-founder and previous driving force John Boecklin [drums, guitars] and vocalist Tommy Vext [Snot] as well as Doc Coyle [guitar], Chris Cain [guitar], and Kyle Konkiel [bass]. The bands debut album, “Disobey” (released through Eleven Seven Music), was one of the breakthrough albums of 2018. The album was the top selling USA rock release of 2018 and peaked at #2 iTunes main chart around the world.

The band were set to release a cover of The Cranberries track “Zombie”. The Cranberries vocalist Dolores O’Riordian was set to contribute vocals until her tragic death on the 15thJanuary 2018. Bad Wolves pressed ahead with the release with all proceeds going to Dolores four children. To date the track has raised over $250,000. The cover peaked at #1 on the iTunes singles chart globally and was certified platinum in the USA and double platinum in Canada.

On the back of a European Tour and playing to 15,000 people at Download Festival, the band support Papa Roach across the USA from the 27th July to the 1st September 2019. The band have also been announced as to support for Five Finger Death Punch’s North America tour – the tour starts November 2019 with dates tbc. 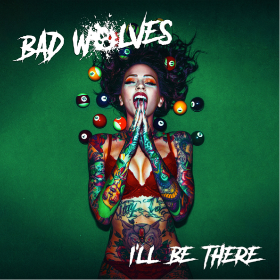