NOLA thrash metal legends EXHORDER have announced plans to release their first album in 27 years, Mourn The Southern Skies, which will be released on September 20th via Nuclear Blast Records. The wait is finally over; today the band has also debuted the record’s lead track, ‘My Time‘, alongside a music video that can be seen at the link below. Fans can pre-order the album now as well.

EXHORDER will also support the new record with their first ever UK/IRE tour dates. Tickets are on sale now, and can be purchased by the links below.

The upcoming run in October that Exhorder will make in support of our first new album in twenty seven years is special for several reasons. Of course, it will be great to return to the wonderful community of Essen, Germany for a show at Turock. However, there are some milestones for Exhorder that must be acknowledged; although over the years my travels with Floodgate, Alabama Thunderpussy, and Trouble have taken me across the United Kingdom, Exhorder has never been to the UK before the one show we did in 2018 at Bloodstock. This year we will do two stops in England, hitting Manchester as well as London. We will also travel north to Scotland, performing for the first time ever in Glasgow as well. For me personally though, the true bucket list item on this trip will be not onlyExhorder’s first trip to Ireland, but mine as well. As the grandson of a full blooded son of Irish immigrants, this half-Thomas half-Harrigan is immensely looking forward to setting foot for the first time on soil rich in history that I know little to nothing about, regarding my ancestry. Our one show in Dublin will make it a brief stop, but rest assured it won’t be our last! Everybody get a good night’s sleep and take your vitamins, because Exhorder is bringing the energy your way in October!!!” 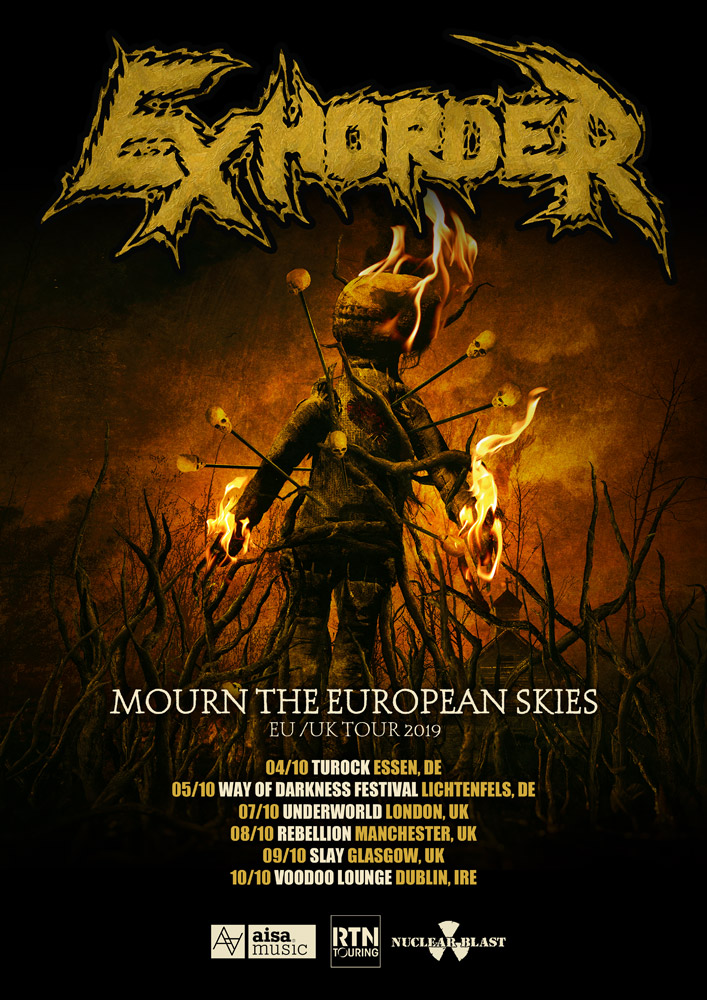 The New Orleans natives made their long-awaited return last year with a string of reunion shows and festival appearances, and now are launching a full-on comeback with the impending release of Mourn The Southern Skies. Recorded with Duane Simoneaux at OCD Recording and working with producer Jens Bogren (Amon Amarth, Opeth, Sepultura) at Fascination Street Studios in Sweden for mixing/mastering, armed with more fury and vigor than bands half their age, EXHORDER has concocted an intoxicating amalgam of old school thrashers and groovers blended with a modern, mature approach.

From the opening of the first track of Mourn The Southern Skies, listeners are reminded immediately just what EXHORDER are – through the spitting rage that ‘My Time’ forces upon their ears. It is evident that the anger remains prevalent, with perhaps a different point of view that younger men could not possibly have understood on earlier albums. Sasha Horn‘s energy and punk influence fire the engines, with Jason VieBrooks locking down the foundation tightly. Vinnie La Bella once again has proven himself “The Godfather” of thrash riffs, which cut through like a high speed drill bit thanks to the stellar production. A lead guitar face-off in the solo not only exhibits Vinnie‘s sometimes under-appreciated skills as a shredder, but also showcases newcomer Marzi Montazeri (“The High Priest of Distortion”). If anyone ever doubted EXHORDER‘s skill set regarding guitar solo-ing, those days are gone forever! And finally, as if riding a runaway garbage truck with fireworks exploding off its roof, Kyle Thomas invokes venom and energy with familiar passion. All in all, the truth is apparent – EXHORDER mean business once again!

EXHORDER’s founding guitarist Vinnie La Bella says of their resurgence, “You can plot and scheme for years, even decades (as is in our case). You can work hard, keep grinding, bang the square peg in the round hole until it looks somewhat presentable. But sometimes you just need to let time tell you, it’s time. Exhorder has its own soul. And it pokes me in the ribs ever so often as if to remind me, ‘Hey asshole, we ain’t done yet!’ Kyle and myself had a dream as teenagers. And as cliché as it may seem, we never woke up from it.Exhorder has always crept in and out of our lives. So no magic bullet or formula here. It was only a simple matter of time before the right guys, the right songs, the right manager/label would finally come to the party. It’s been damn near 35 years since we first uttered the name, Exhorder. 27 years since our last record, and a whole lot of breaking up and making up in between. So why is this time different? Why start again at 50 years of age instead of retiring? Simple… because it’s finally, TIME.

EXHORDER’s enduring legacy began in the mid-80’s when they defined the sound of Louisiana thrash and groove metal. Their initial formation was short lived, lasting nearly a decade with two critically acclaimed, classic albums, but their impact on the metal genre can be felt through a generation of bands that followed. EXHORDER dissolved in the mid-90’s but briefly reunited in 2011. Now, the band has returned to reclaim their throne of NOLA metal with their awaited new album and an all-star line-up that includes Kyle Thomas (founding vocalist; Trouble, Heavy As Texas), Vinnie La Bella (founding guitarist), Marzi Montazeri (guitarist; ex-Superjoint Ritual, ex-Phil Anselmo & The Illegals, Heavy As Texas), Jason VieBrooks (bassist since 2011; Heathen, Grip Inc.) and Sasha Horn (drummer; Forbidden). 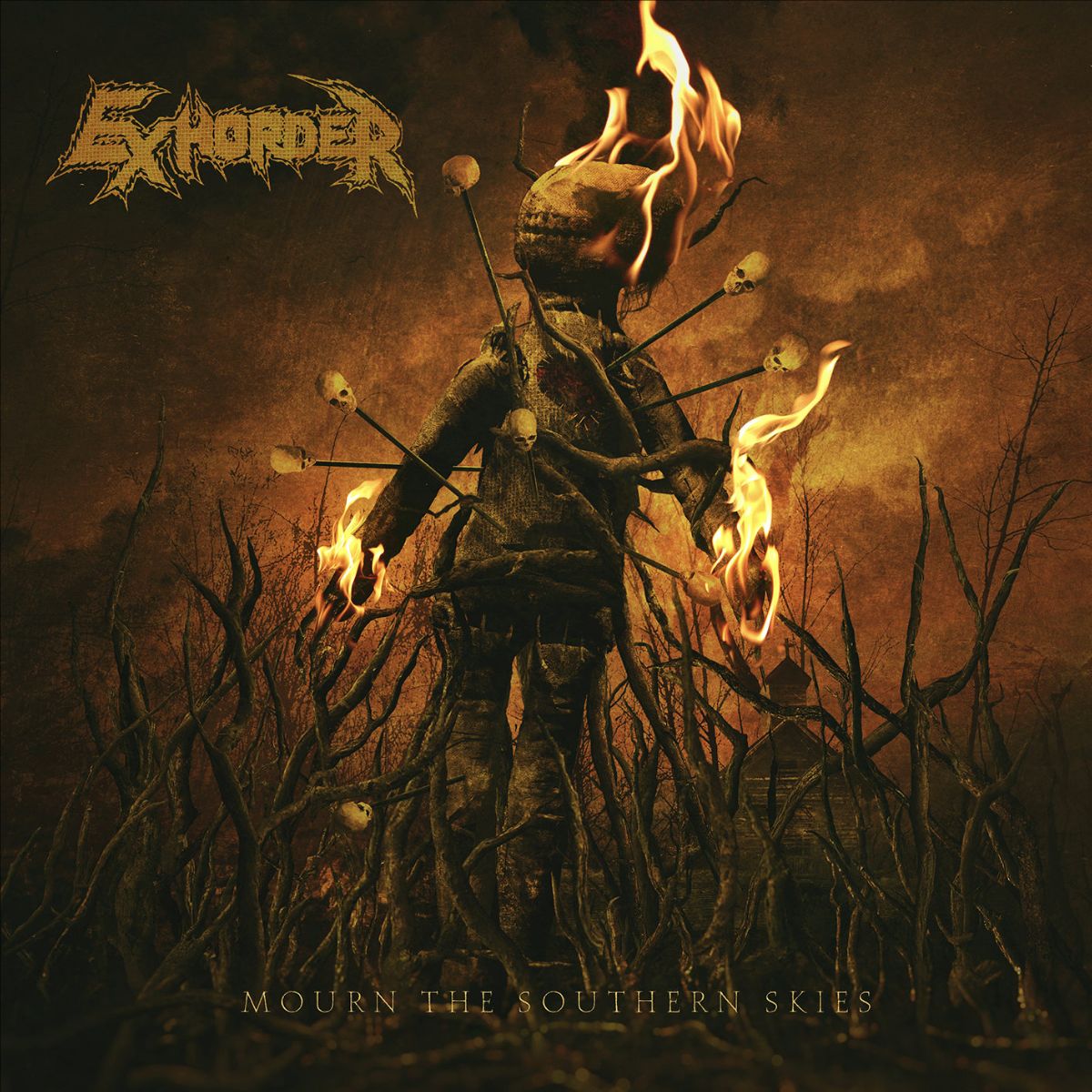