January 20, 2022
Trending Now
Home News As HRH Prog launches its 9th voyage, there is no better way to do it than haul in the legends in this double header

HRH Prog IX is all about legends…

And legends don’t come any bigger than Yes keyboard wizard – songwriter – producer – TV and radio presenter and author Rick Wakeman. With 90 solo albums to his name, Rick continues to lead the way in British prog, having released his latest creation “Piano Odyssey” in 2018.

We are humbly honoured to welcome a genuine rock icon to HRH Prog IX and Rick is bringing his full band to the two venues next March – the O2 Academy in Sheffield and the prestigious Shepherds Bush Empire in London – so expect a set brim full of music from a career spanning 6 decades plus perhaps progressive takes on a rock classic or two.  We honestly can’t wait for this.

The second headliner is none other than Mr Hawkwind himself – Dave Brock.  This “Audience With” set delves into a vault of music and stories we can only describe as “Brockworld”. From the busking and banter from the dawn of Hawkwind to playing some gems from his 6 solo albums, which have never really seen a live audience to moving into unchartered Hawkwind territory, this is a must for all true Hawkwind & Prog fans alike. 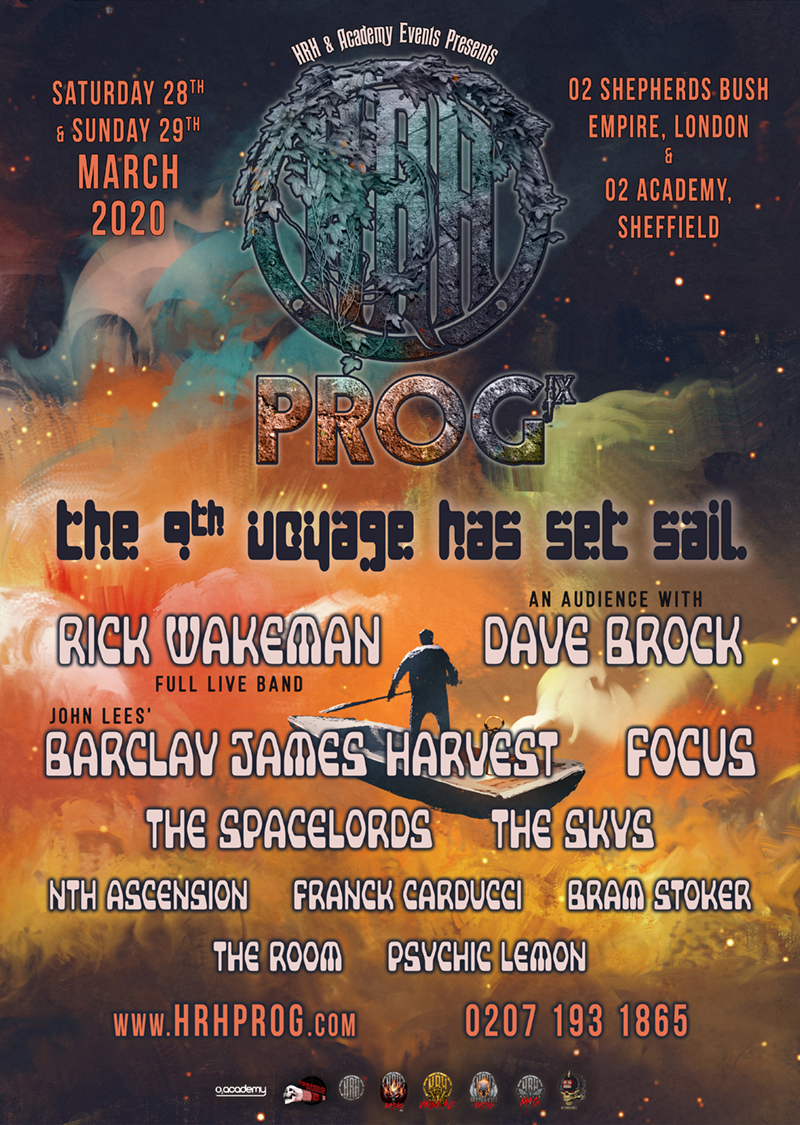 As if two legends of rock aren’t enough – two more huge names in prog are heading to HRH Prog IX.  We have John Lees’ Barclay James Harvest who are continuing to carry the torch for the band that released no less than 10 albums in the 1970s, featuring the trademark Mellotron keyboard sound beloved of many a progressive rock fan.

Focus fly in from Holland to join us next March.  Best known of course for their 1971 hit “Hocus Pocus”, the guys are still very much active having released their latest album “Focus 11” earlier this year to critical acclaim.

All the way from Lithuana, and making a return to HRH Prog, are The Skys.  Having released their latest – and brilliant – album “Automatic Minds” just a few weeks ago we can’t wait to see Jonas and the guys again.

Also announced for HRH Prog IX are German’s The Spacelords who bring their wonderful space rock set to London and Sheffield.  Nth Ascension have caught the prog community’s attention with their latest album “Stranger Than Fiction” released this May and we can’t wait to welcome them to the HRH family.  French based Franck Carducci makes his HRH Prog debut – and lists Pink Floyd, Genesis and Supertramp amongst his influences – perfect for us! Bram Stoker are having a resurgence having been best known for their 1972 prog epic “Heavy Rock Spectacular”.  The Room will feature their new line-up – currently making waves with their latest release “Caught by the Machine.” Cambridge based psych-space rockers Psychic Lemon round out the incredible line-up for HRH Prog IX.

HRH Prog 8 at Shepherds Bush Empire Sold out in 4 weeks and Sheffield in 4 months after it was added. The 9th voyage is live and unleashed this Wednesday 31st July at 10 GMT – jump on board quick if you want to take full advantage of the Early Bird rates, Hotel Packages which include Royalty & VIP passes and the ever popular Royalty passes which disappear like gold dust very early.