Suffolk hellhounds Cradle Of Filth are proud to announce that something dastardly is brewing. The vile six piece will be appearing at one of London’s iconic theatre venues, The Palladium, this Saturday 19th October for a very special show – dubbed ‘Into The Pallademonium‘.

The evening’s proceedings will comprise a UK exclusive Cruelty And The Beast set in which they will play the album in full, as part of Cruelty‘s continuing 20th anniversary celebrations, followed by a second act full of graven favourites. The preparatory conjurations have begun and the blood oath is settled – make sure you don’t miss out, because this event is set to be a night that we’ll never forget!

The Nightmare Before Halloween. Cradle of Filth are very much looking forward to bringing this experience to the capital just prior to Halloween this year. It’s certainly going to be a night to remember, with a massive production accompanying not one, but two sets from yours truly, in a night dead-icated to all things ghoulish, flamboyant and macabre. So come on down to London Town fellow creatures of the night and experience Cradle Of Filth as you’ve never seen us before; performing not only one of our most celebrated releases, but also a slew of other fan-favourites, amidst cool and opulent surroundings.

Cruelty And The Beast is Cradle Of Filth‘s third studio album. Released in May 1998, it propelled the band into the global limelight cracking the Top 50 charts in the United Kingdom, Germany, Holland, France, Austria and Finland. A concept album based on Hungarian blood countess Elizabeth Báthory (which excellently featured guest narration from Ingrid Pitt as Báthory, the role she first played in the Hammer horror film Countess Dracula in 1971), it showcased the band’s hybrid of brutality and macabre romanticism. It was a groundbreaking record for the band for several reasons, but notably because it was the first time that Cradle Of Filth explored making a concept record. 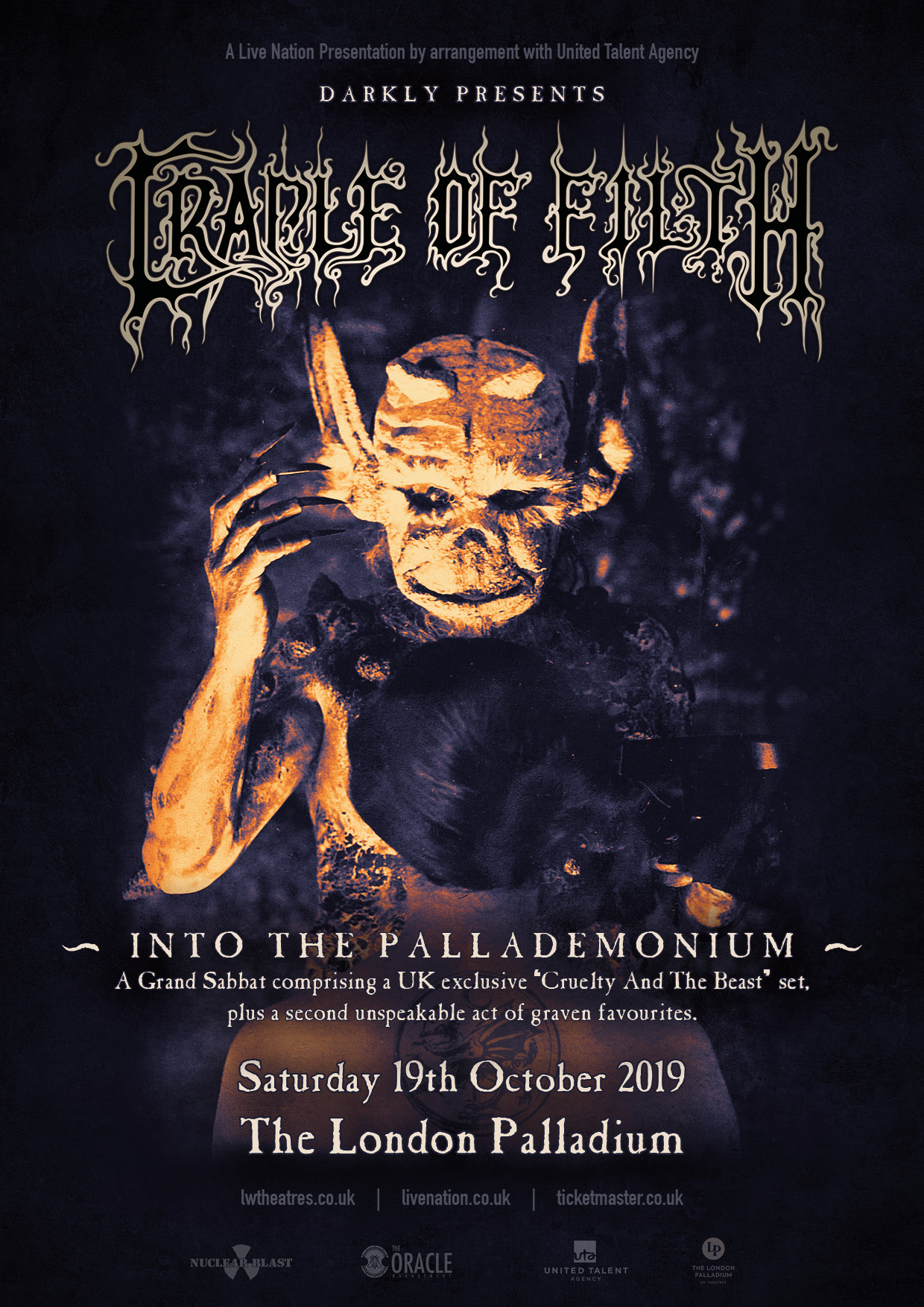 Cradle Of Filth released their latest, twelfth studio album Cryptoriana – The Seductiveness of Decay in 2017, to global rapturous praise. The album is infused with Victorian gothic horror. ‘Cryptoriana’ implies the Victorians’ infatuation with the supernatural, the grave and the fervently ghoulish. The subtitle, ‘The Seductiveness Of Decay’, further cements the attraction to death and the glittering lengthy process of self-annihilation.

You can purchase Cryptoriana – The Seductiveness of Decay physically HERE and digitally HERE.

Formed in England in 1991, Cradle Of Filth generated an immediate underground buzz with their early demos, before stamping their authority on the UK’s burgeoning black and death metal underground with their debut album, The Principle Of Evil Made Flesh, in 1994. A monstrous blend of ornamental terror and pummelling vitriol, it marked the band out as a unique proposition and one of few modern bands capable of driving heavy music forward while honouring its traditions. Not surprisingly, a combination of frontman Dani Filth’s insanely evocative lyrics and the intensely detailed and the compelling imagery that the band harnessed with great skill have since ensured that Cradle’s music has both endured and expanded over the best part of three decades. A relentless series of invigorating and enthralling studio albums have kept the band firmly in the bloodshot public eye, and despite numerous line-up shuffles and subtle stylistic shifts over the years, Cradle Of Filth have slithered from grand triumph to grand triumph.

The 21st century has seen the band enhance their allure and fortify their artistic achievements. Early albums like Dusk…And Her Embrace (1996) and Cruelty And The Beast (1998) are widely regarded as classics, but it is more recent feral fare like 2008’s grim conceptual splurge Godspeed On The Devil’s Thunder, Hammer Of The Witches (2015) the band’s debut for current label Nuclear Blast, and most recent Cryptoriana – The Seductiveness of Decay (2017),  that have cemented and sealed Dani and his cohorts’ reputation and renown. Currently enjoying a collective creative renaissance that is driving them to new heights of elegant fury, the band – Dani, guitarists Ashok and Richard Shaw, bassist Daniel Firth, keyboard and vocal siren Lindsay Schoolcraft and mercurial percussive mainstay Martin Škaroupka – are more potent and devastating than ever before as they approach the release of their latest and perhaps greatest studio effort, Cryptoriana – The Seductiveness Of Decay.