The Dust Coda is thrilled to announce the release of the brand new single “Breakdown” on 13th September 2019. In addition, the band will accompany the track with a video, which can be viewed below.

Breakdown” sees the band developing a more mature song-writing direction; the track is a classic hard rock anthem, but there is nothing obvious about it. Whilst all the typical rock elements have a strong presence: fast and virtuous guitar solo, hard-hitting drums and captivating vocals; they all find a more refined counterpart in the bluesy reminiscences dotted throughout the track. From a lyric point of view “Breakdown” is a cautionary tale of the music business, describing a young, confident and hungry upstart trying to break through the machine, and warning her of what lays ahead.

The band comments: “The song is a commentary about the desperation for fame in the industry and in popular culture in general and the void in personality of performers that it cultivates. The business these days is full of puppets, hacks and wannabies all lining up like cattle for the great break that comes in the way of so called talent contests that have nothing to do with talent or artistry. We didn’t grow up wondering what supermarket Chris Cornell, Trent Reznor or Axl went to. We imagined them hanging upside down in dens of inequity surrounded by crazy vampire groupies. That’s a much better image and far more interesting even if it’s a load of bollocks.

To coincide with the single release, The Dust Coda will embark on series of UK headline shows in September, followed by a performance at the Massive Weekend in October and the prestigious Planet Rockstock Festival in December. Having played with Iron Maiden Steve Harris’ British Lion, super-group Dead Daisies and American legends Black Stone Cherry, The Dust Coda have a great live performance experience under their belt and promise to deliver a show to be remembered.

Formed in 2015 around the nucleus of guitarist Adam Mackie and singer John Drake, The Dust Coda honed their sound during 2016 in the studio with award winning producer Clint Murphy (Thunder, Manic Street Preachers, Devilskin). The band released their self-titled debut album in October 2017 to critical acclaim, were proclaimed “Ones To Watch” by Planet Rock and subsequently nominated for Best New Act 2017. 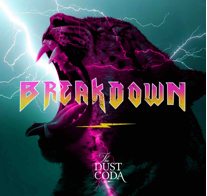