Vancouver’s hard-rock icons ART OF DYING are set to release a new studio album, “Armageddon”, on the 4thOctober 2019. The album will be preceded by a new title track single taken from the album, released on the 23rdAugust 2019.

The Art Of Dying story starts with their talismanic front man Jonny Hetherington. From hours busking on the corners of frozen streets to gatecrashing some of North America’s biggest venues, to writing and recording records of truly earth-shattering proportions, the trajectory of the quartet’s career has astonished both fans and industry insiders alike.

ART OF DYING have been able to create muscular, vivacious hard-rock bursting with lung-shattering choruses and a sincerity that is impossible to fake. Equally at home with a lead-fingered riff or a deft slow-burner, there is an ease of breadth in AOD’s repertoire.

I was blown away when I first heard their independent record,” enthuses DISTURBED guitarist Dan Donegan. “I lived with it for quite a while and I was so impressed with the quality of the songwriting that I had a feeling there was something special going on. David (DISTURBED vocalist David Draiman) and I had been looking for someone to sign to our imprint for a while, but I wanted to make sure the guys could do it live – it’s hard to find a band that are the complete package these days. So, we invited them out on a DISTURBED tour of America, we really threw them in the deep end. 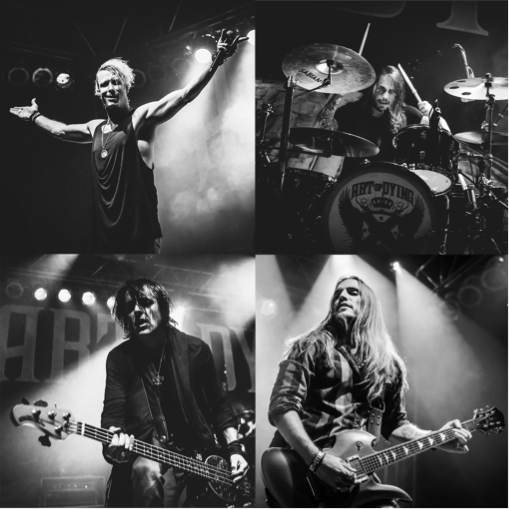 The band introduced guitarist Tavis Stanley and bassist Cale Gontier to their ranks on the eve of the run with DISTURBED – the quartet playing onstage together for the very first time during the soundcheck of the opening show of the tour. But suddenly, everything clicked. “The moment I knew that we had it right was when our voices started harmonizing,” says Hetherington, of the band’s now-trademark three-way vocals for which David Draiman has dubbed them “Eagles in Chains” referencing a blend of 70s supergroup The Eagles and 90s grunge rockers Alice In Chains.

Now, with two critically-acclaimed and widely-played major label releases under their belts, Art Of Dying are returning with Full Length Album “Armageddon”, their most imperious effort to date. “It’s a dark record.” Says Jonny. “Even the cover art (featuring NYC artist Stefano Losi’s painting of Pharaoh Thutmose III) is inspired by the album title. Thutmose lead the historic battle in Megiddo, (aka Armageddon) the first war in history where proper records were kept and a body count was taken.

Themes like “No One Ever Wins”, “Dark Days” and “Unoriginal” take the listener down to visit the depths of the deep end. But no Art of Dying record would be complete without the inspirational balance of spine-tingling anthems like new single “Armageddon”, “Cut It All Away” and “ShatterProof.

Of first single “Armageddon” Jonny Hetherington says, “Life sucks. Life is beautiful. Writing Armageddon got me through a tough time and helped shake a few of the demons off my back. If you feel like your world is caving in, like you’re trapped in your own personal Armageddon, I hope you will find the strength to get out.

If ARMAGEDDON is about one thing above all else it is a study on the power of human will and the uplifting capacity of one’s own self belief. This is rip-snorting rock ’n’ roll that will smash your self-doubt into a million pieces. 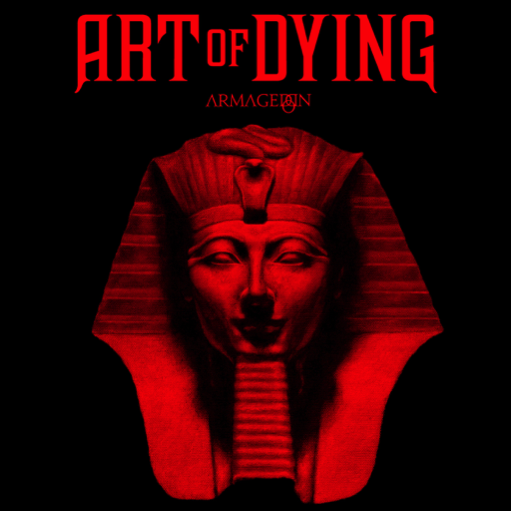 Armageddon” is released through Get A Grip on the 4thOctober 2019. The new album is available to preorder now, including a limited transparent red vinyl pressing:
https://smarturl.it/AOD_Armageddon