People had come from all over the world, press and fans traveling from as far afield as Japan, America, Europe, Norway, Germany and Holland to be at this very special concert.

Before the music there was a VIP event, ‘More Life with Deth’, Ellefson’s book signing, and also KK signed his own book ‘Heavy Duty Days and Nights’.

VIPs and press were also treated to a meet and greet with all the legends and a Q&A session with Mark Eglington the co-author of Heavy Duty where the fans were invited to also asked questions.

This was a fantastic way to welcome fans and also for KK to thank them for their support for both his Steel Mill venue and his career over the years.

This was an extra special tonight as there were many other legendary guests joining KK and David on stage: Tim (Ripper) Owens who sang with Judas Priest in 1996 till Rob Halford re-joined in 2003, Les Binks drummer for Priest on the Killing Machine, Stained Glass and Unleashed in the East albums, also local Birmingham guitarist A J Mills
Kicking off the proceedings was the frontman from Wolfsbane and former Iron Maiden  Blaze Bayley. 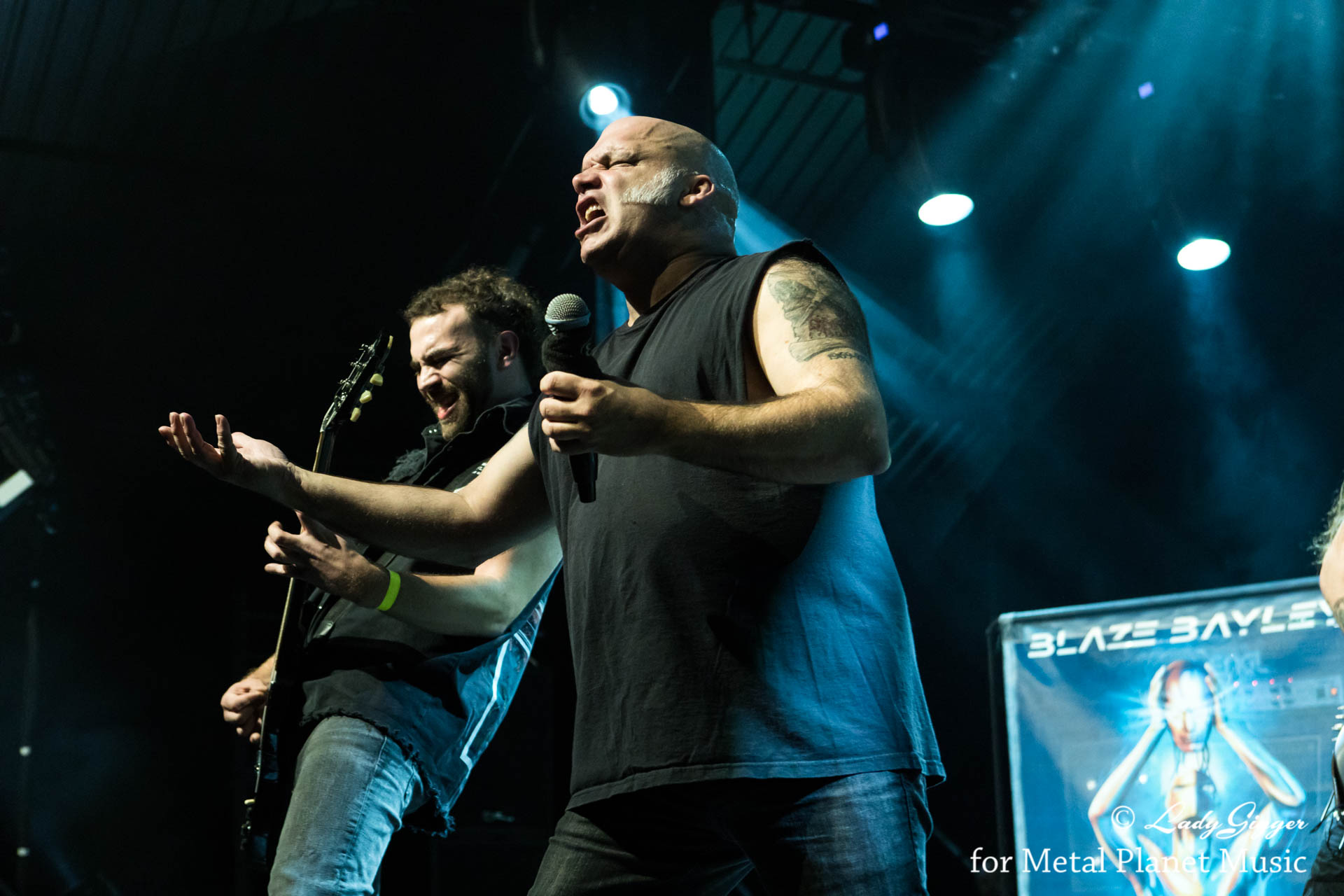 As so many fans had turned up for the meet and greet it over ran so I only managed to see half his set. I walked in on a huge crowd and he was halfway through his song Silicon Messiah, the title track of his debut studio album.

He then told everyone he was completely independent and didn’t rely on any corporate management and it’s the fans that kept him going and then invited everyone to come and see him at the merch desk afterwards which was met by applause. 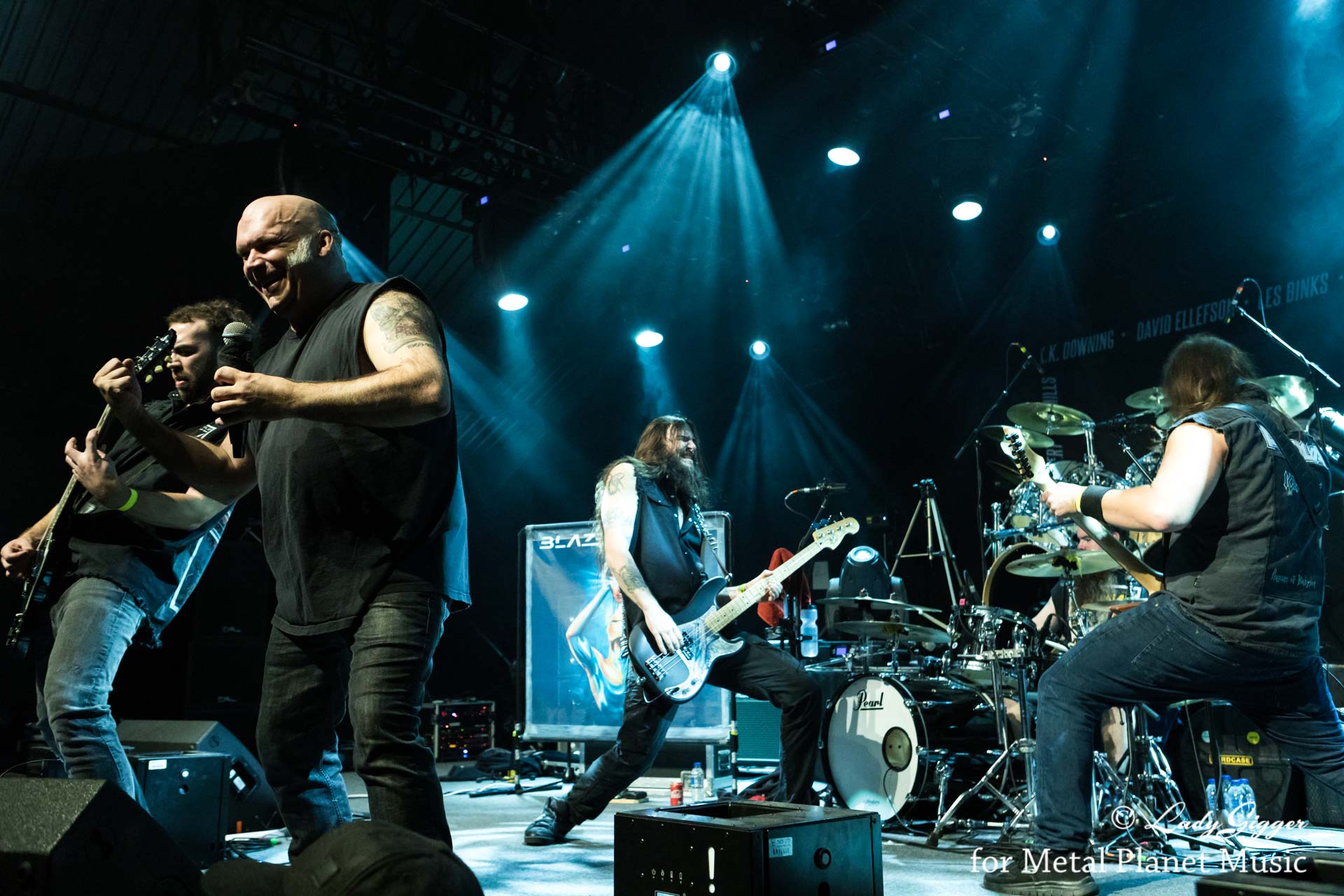 The Birmingham born singer said how great it was to be opening this special night and then went on to sing Calling you Home from his Infinite Entanglement album. Ending with two songs he sang with Iron Maiden Man on the Edge and Futureal as he went along the entire front row high fiving them, also putting his phone on live cast as he film them.

Blaze has a really sweet tone to his voice as well as the power and I enjoyed what I saw of his set. He has a big following and stayed around for a long time, meeting people and signing things for them.. 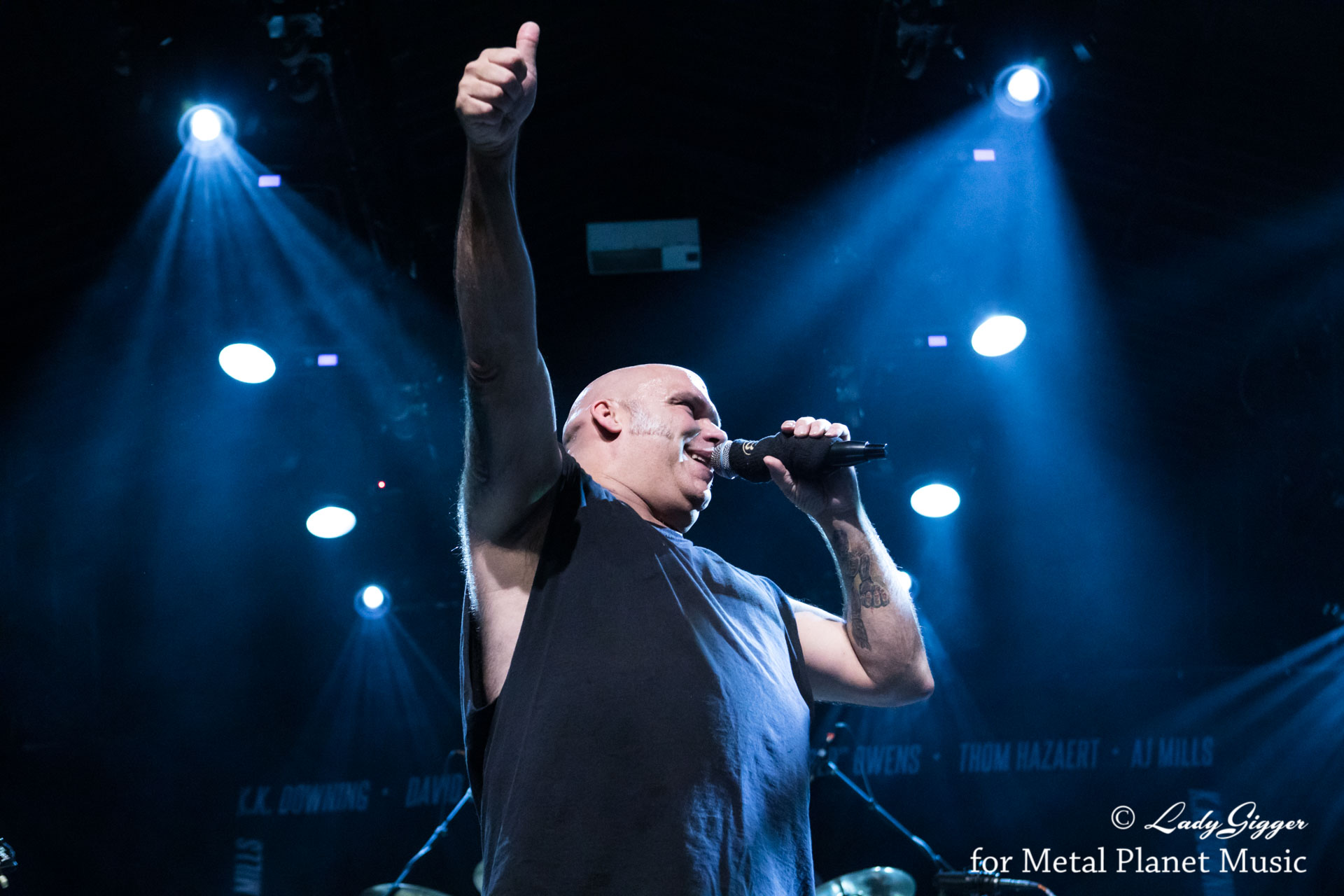 Next up David Ellefson’s band along with his co-author and vocalist for the night Thom Hazaert, Andy on guitar and two Italians, Ricardo on Drums and the other guitarist Valerio. “This is why this band is so F*~kin sexy” screams Thom.

This guy is a man mountain on stage and has an ear-piercing scream when he sings; at times very black metal style, beginning their set with two Megadeth tracks Wake up Dead and The Conjuring, (for those who don’t know David is the co-founder member of Megadeth, with Dave Mustaine). 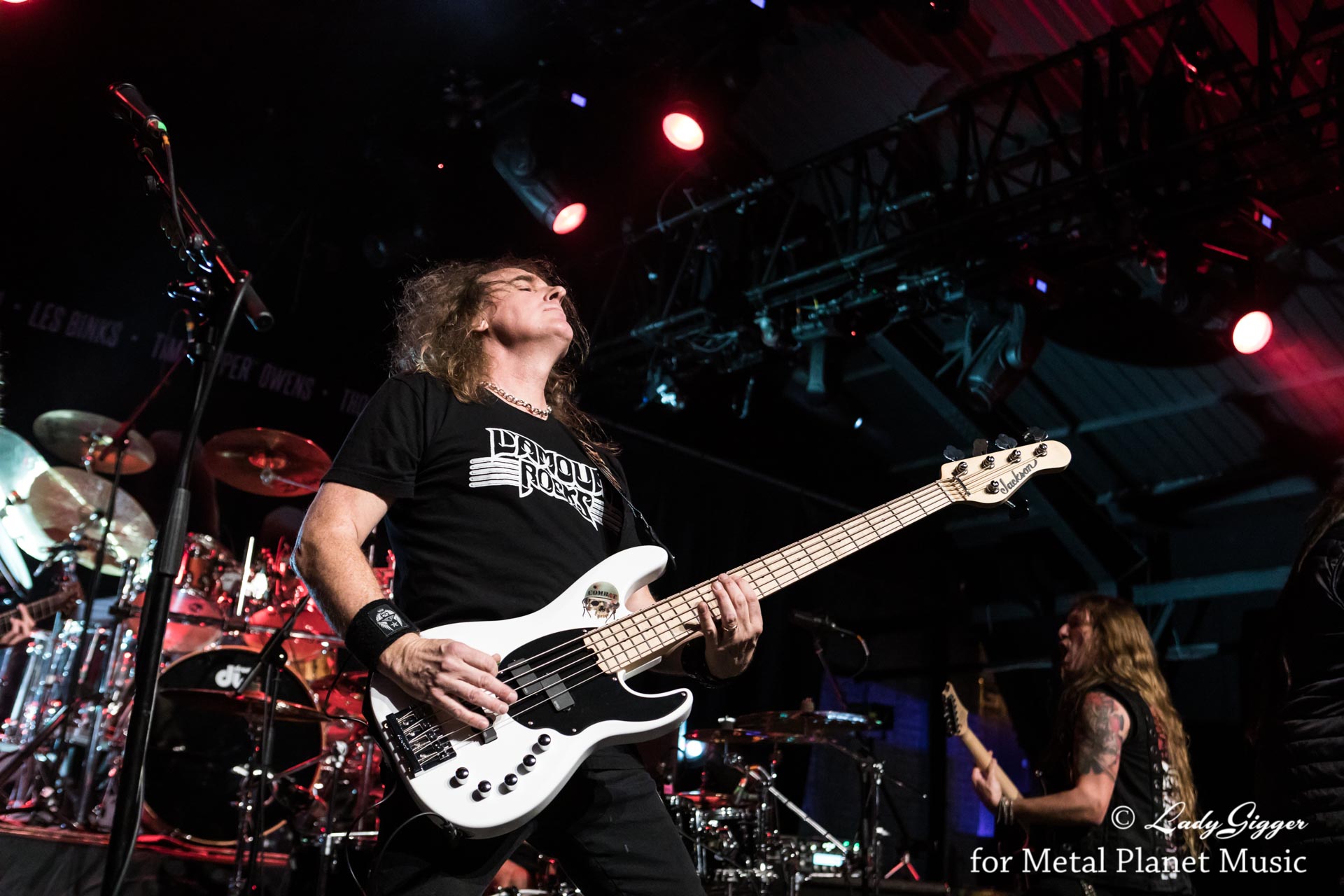 Next the song Vultures from Ellefson’s solo project Sleeping Giants which Thom sang on.
Time to give Thom’s throat a rest while David himself sang If you were God, then keeping the thrash sound alive all night with Megadeth songs.

The crowd lapped it up and Thom was a worthy replacement for Dave Mustaine: they are big shoes to fill but he did a great job. Symphony of Destruction and the final number the classic Peace Sells had the crowd headbanging and joining in. 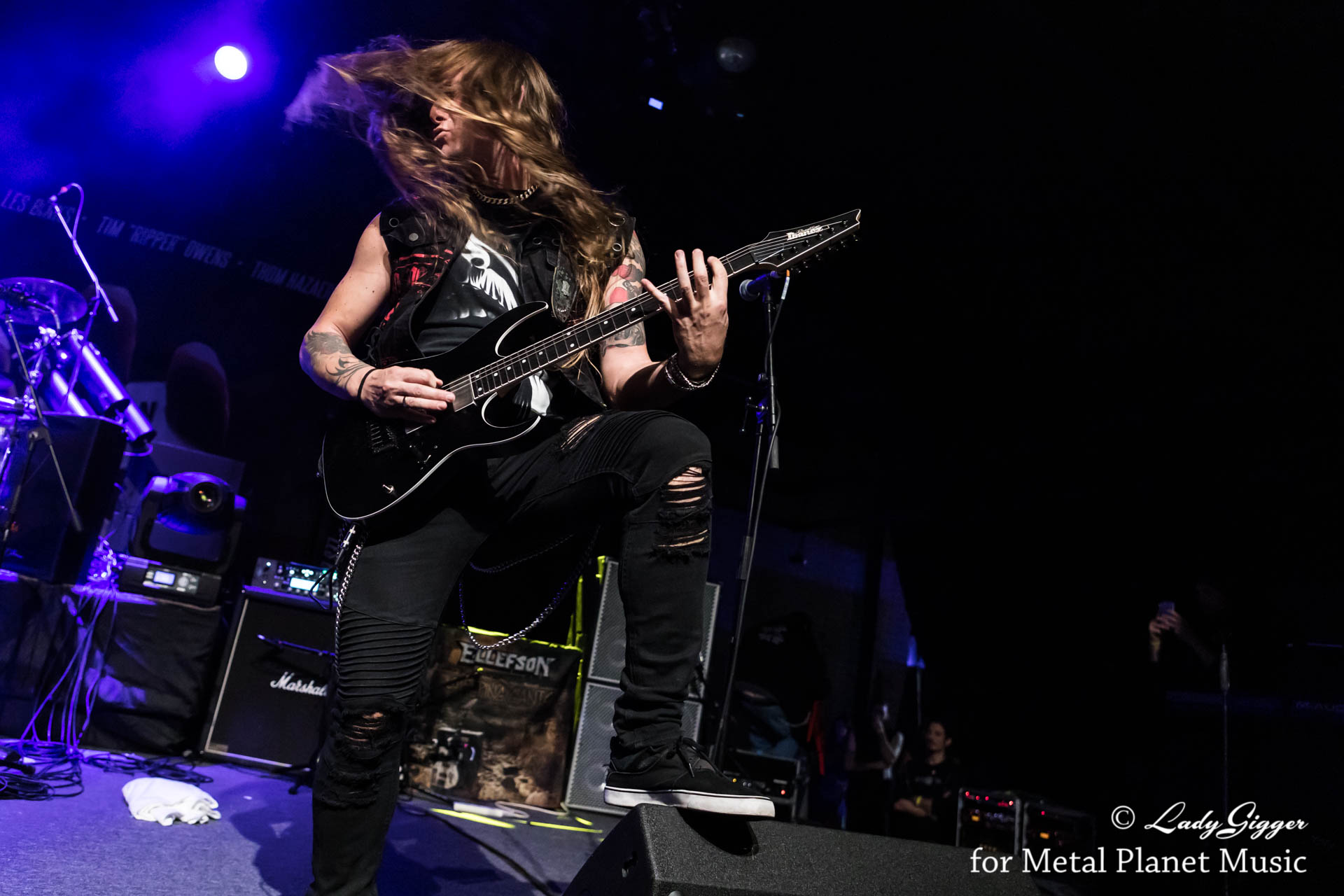 After their set David shouts, don’t go anywhere: be right back.

Now for the main event and the main reason everyone was here tonight: these legends of rock were going to be playing a whole set of Judas Priest’s greatest hits and with Priest being my all-time favourite band I couldn’t wait.

When they all came on stage accompanied by David Ellefson the roar of the crowd was amazing. Starting with Riding on the Wind from their 1982 album Screaming for Vengeance, Ripper was going to get a chance tonight to sing Priest numbers he had never performed before. 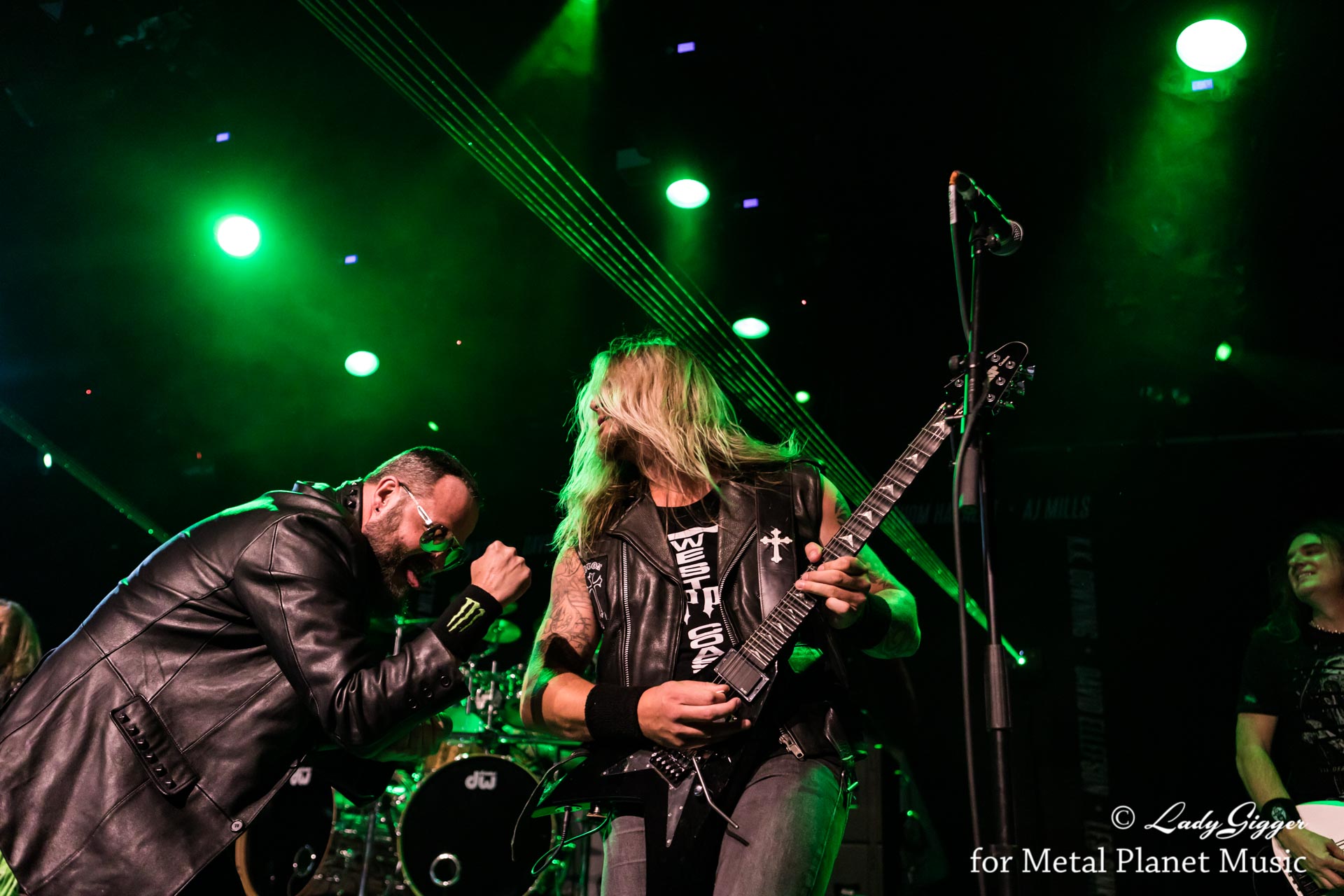 His incredible voice filled the hall and he looked happy and shocked at the audience immediately singing along with him.

Next, one of my favourites: the cover of Fleetwood Mac’s Green Manalishi; I loved Rob Halford’s rendition of this but Tim also did a fantastic job. All the favourites were there tonight Hell is Home, Running Wild, and the drum intro from Les Binks on Exciter was just brilliant: this man’s fills on the toms are just unbelievable. 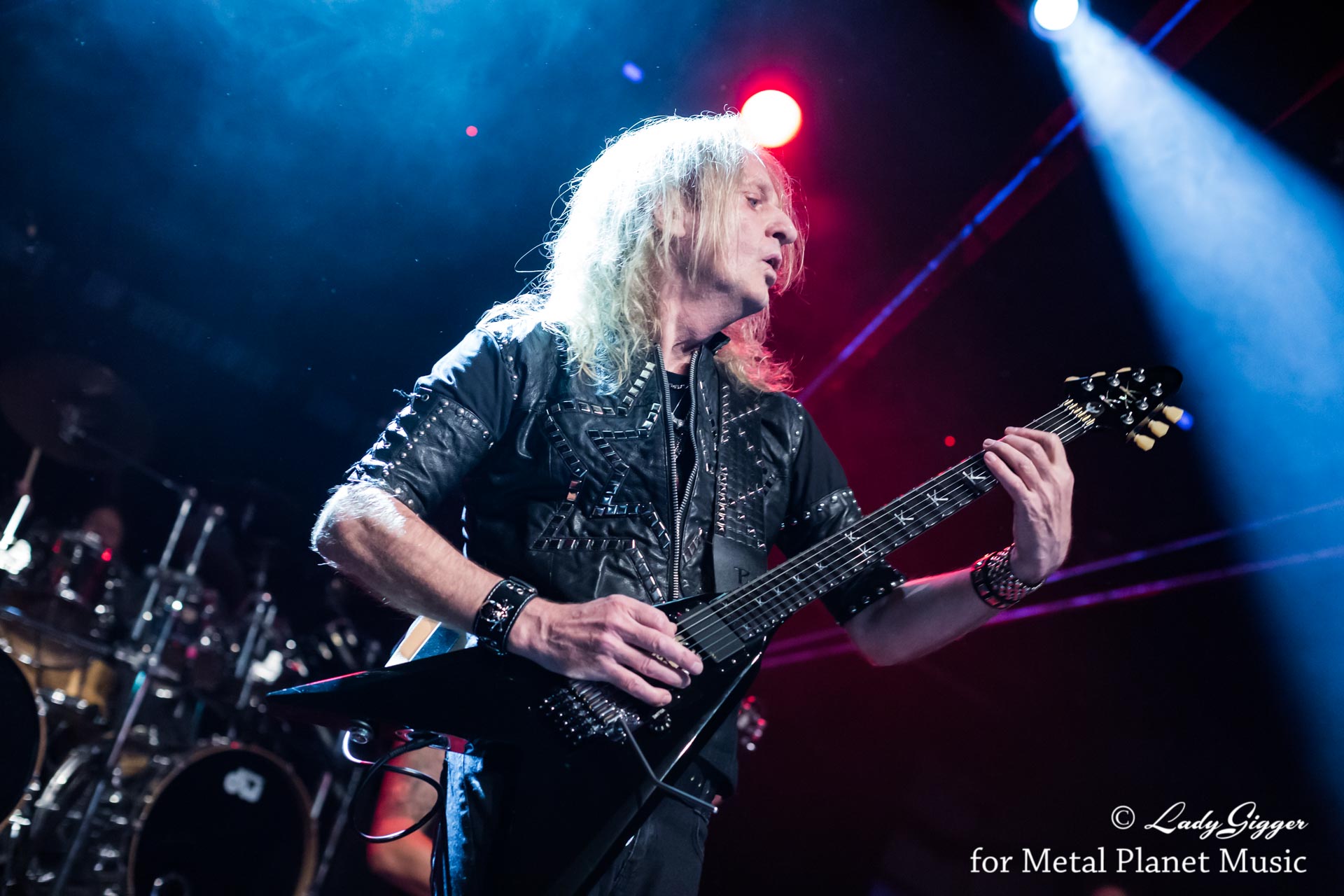 Tim didn’t have to ask the crowd to sing with him as they sang along with everything and he had them screaming and fist pumping all night. AJ Mills was also excellent, showcasing some real skills both on solos and dual guitar work. With KK he is in the band Hostile whose two albums were produced by Downing himself.

Burn in Hell with an impressive bass intro from Ellefson and flames shooting out from either side of stage was very atmospheric and with lasers shooting out right to the back of the hall this was a great stage production. 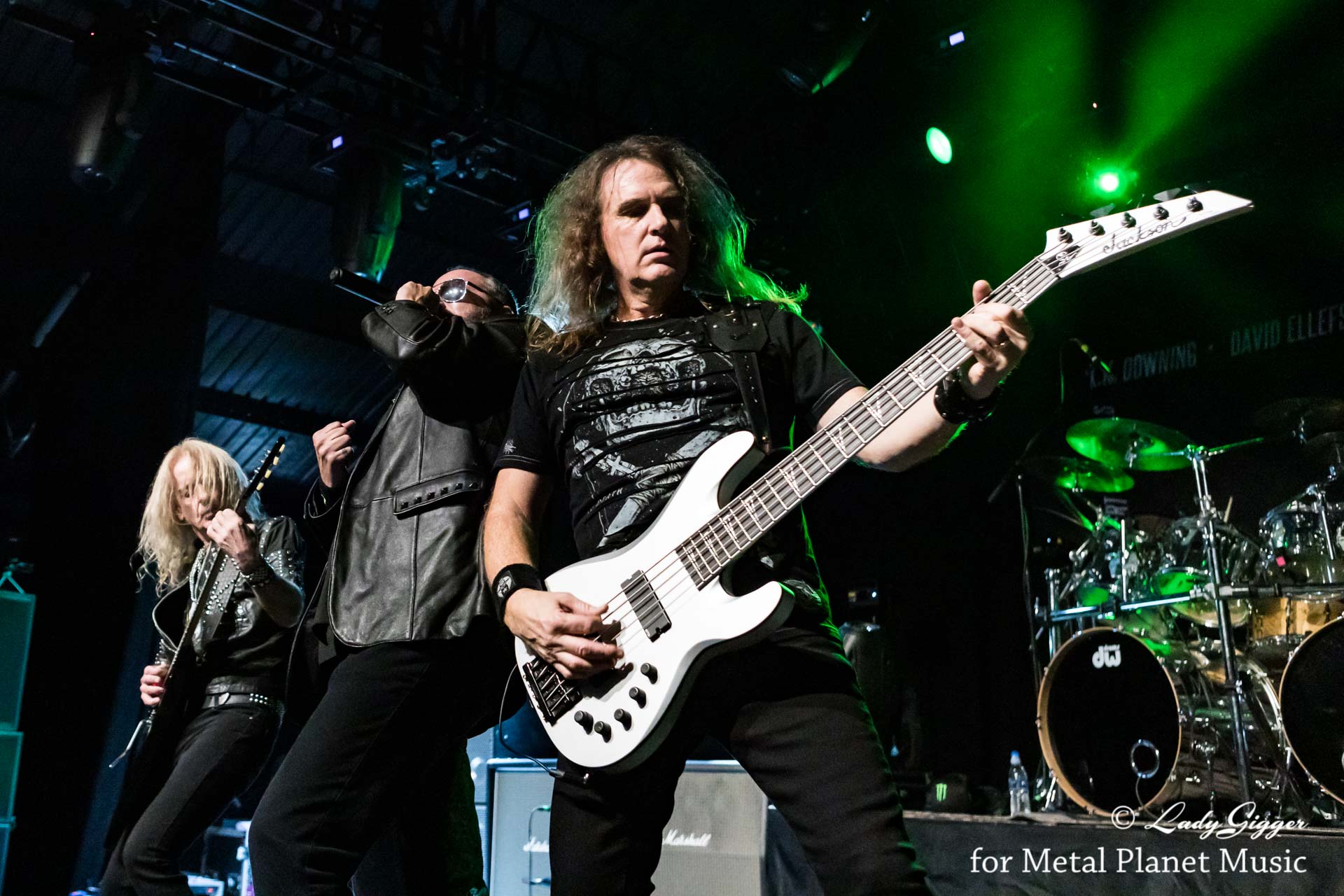 They really pulled the stops out and it is a long time since I’ve heard a crowd so loud and sing along all night. It was also wonderful to see KK on the stage performing those amazing guitar solos: back where he belongs and you could see he loved every moment tonight.

Ripper announced the next song Before the Dawn which he had never  performed live on stage before, so it was extra special for him to sing it. It’s a sad ballad, not common for Priest, but sung beautifully by Tim. And KK and AJ both shone as well.

The final three songs were total classics Between the Hammer and the Anvil where the chorus was sung back to Tim with such enthusiasm by the frenzied audience, and the final two songs Hell Bent for Leather and Living after Midnight with so much jumping around I found it hard to write my notes. 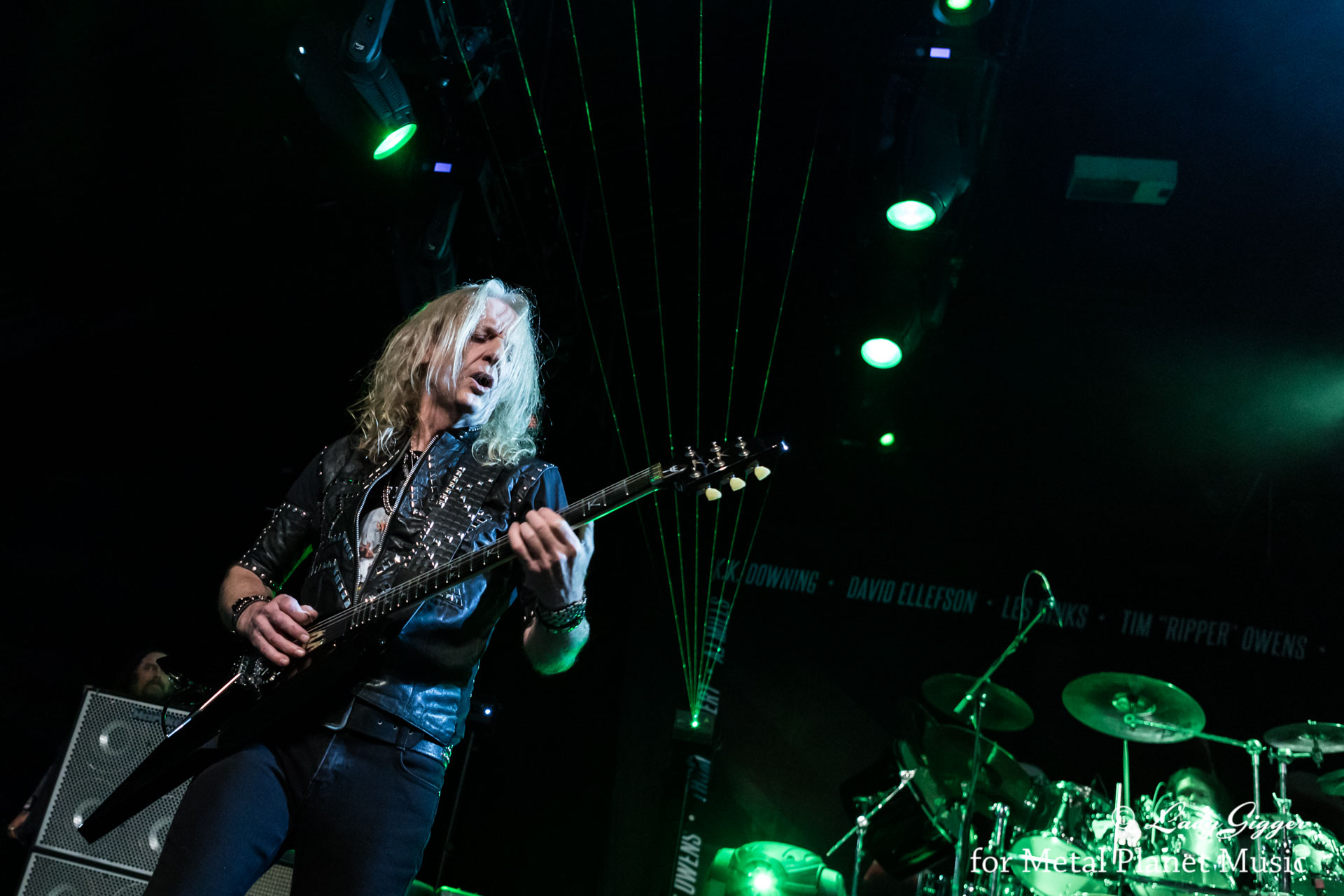 No one was going anywhere without an encore so the band returned to the stage, this time with Thom to perform two final songs, Take on the World and Breaking the Law with him sharing the vocals with Ripper.

This event was David Ellefson’s baby that started in a conversation with KK about doing a jam together, and eventually escalated into what we saw tonight. `what we saw was without a doubt my gig of the year! If you ask me what was the highlight, there were just too many to mention it was a sensational night.

And it didn’t end there for us as we were leaving, someone noticed Carol’s camera and asked us if we wanted to meet Alan (AL) Atkins, the founder of Judas Priest: an opportunity we couldn’t say no to and I had my photo taken with him too.

So a great ending to a spectacular night. Thank you, Chris Johnson, AL’s guitarist, for asking us.