A 2 day rock festival in a small affluent Ayrshire town in Scotland , on paper shouldn’t work , but thanks to local Ayrshire boy Ian McCaig whose idea this whole concept was , it works an absolute treat.

This year the honour of opening the weekend falls to THE OUTLAW ORCHESTRA , who hail from the deep south of the UK and bring their up tempo brand of southern country rock to Troon to warm us up on a bitterly cold November day. 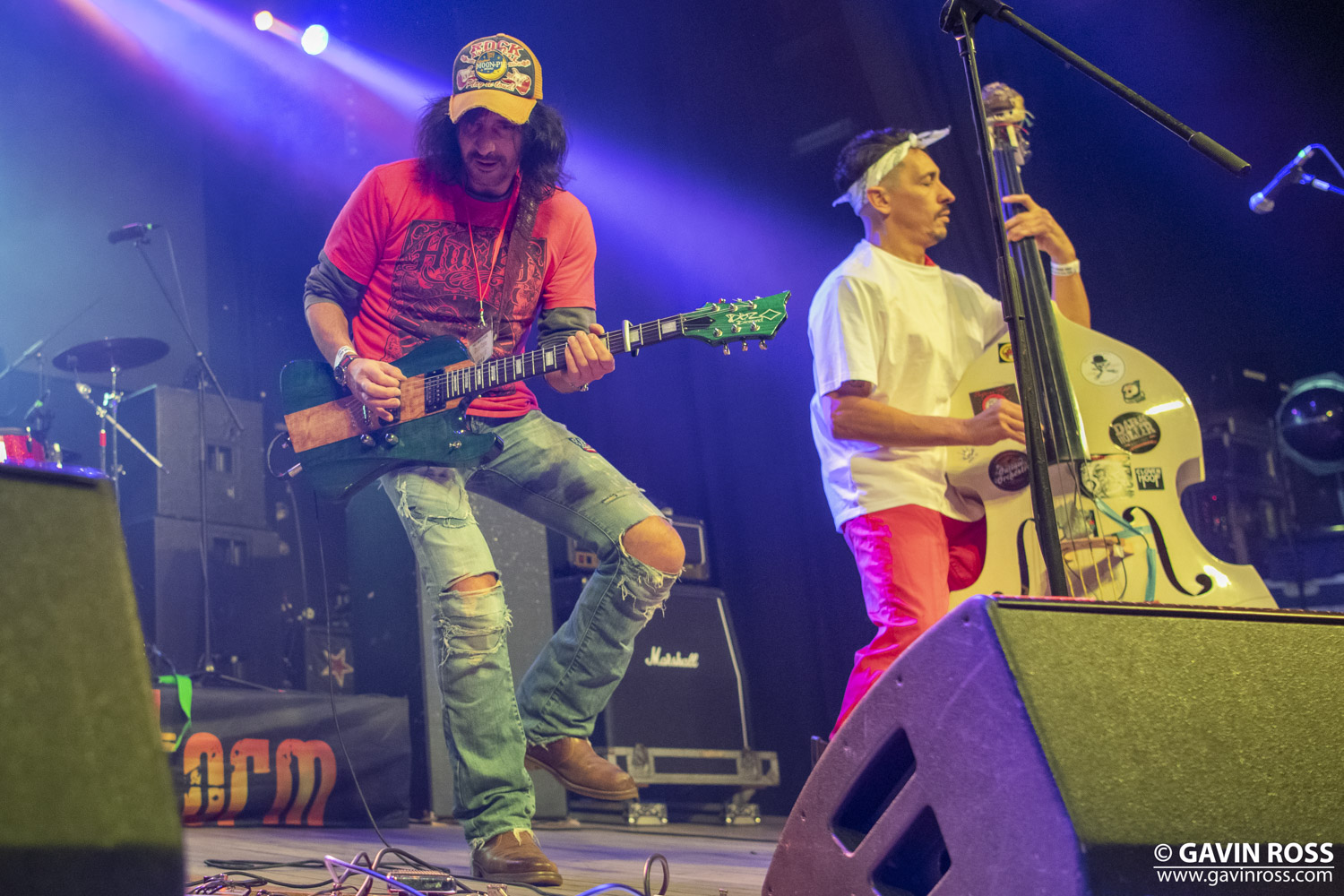 Former Mama’s Boy PAT McMANUS is up next with his self named band and treats us to some great blues rock with a couple of old Mamas Boys tunes thrown in for good measure. 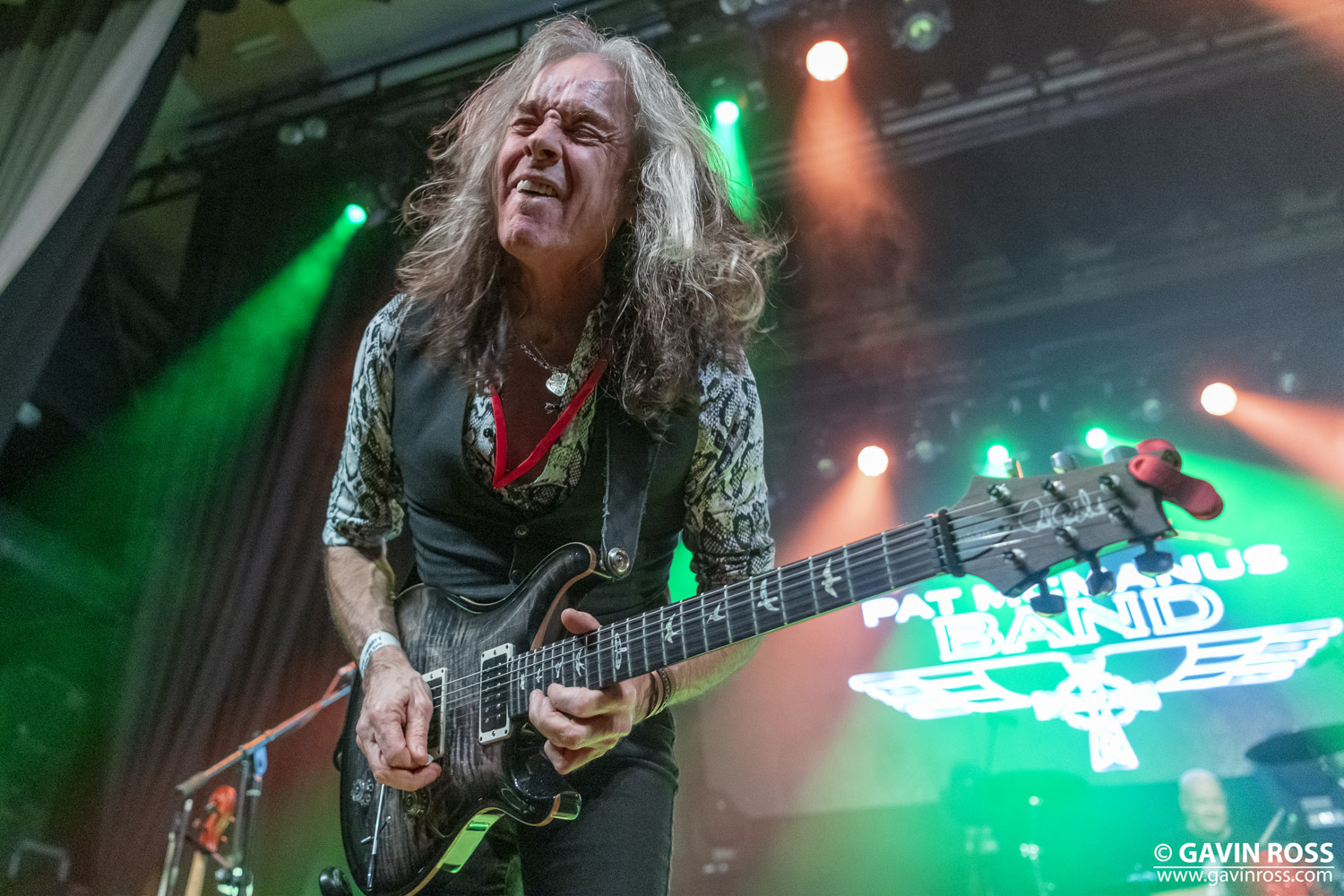 GRAND SLAM were formed by Phil Lynott & Laurence Archer, but were cut short in their prime by the untimely death of Lynott , however Archer has put together a strong band and have recently released a new album of new and reworked tracks and show today how good an album it is . They leave the stage with the crowd begging for more.

THOSE DAMN CROWS , are next and I for one have been counting down the days to see them and it appears the whole crowd are the same , and they don’t disappoint. The energy these guys exude is staggering , frontman Shane Greenhall has one of those voices you can’t get enough of and he is all over the hall , in amongst the fans , up on the balcony pretending to jump whilst never missing a note and his acoustic first half of fan favourite ‘Blink of an eye’ is one of my weekends highlights.

Winter Storm also run a second sessions stage upstairs in conjunction with the main stage which works really well with minimal overlap between both stages. 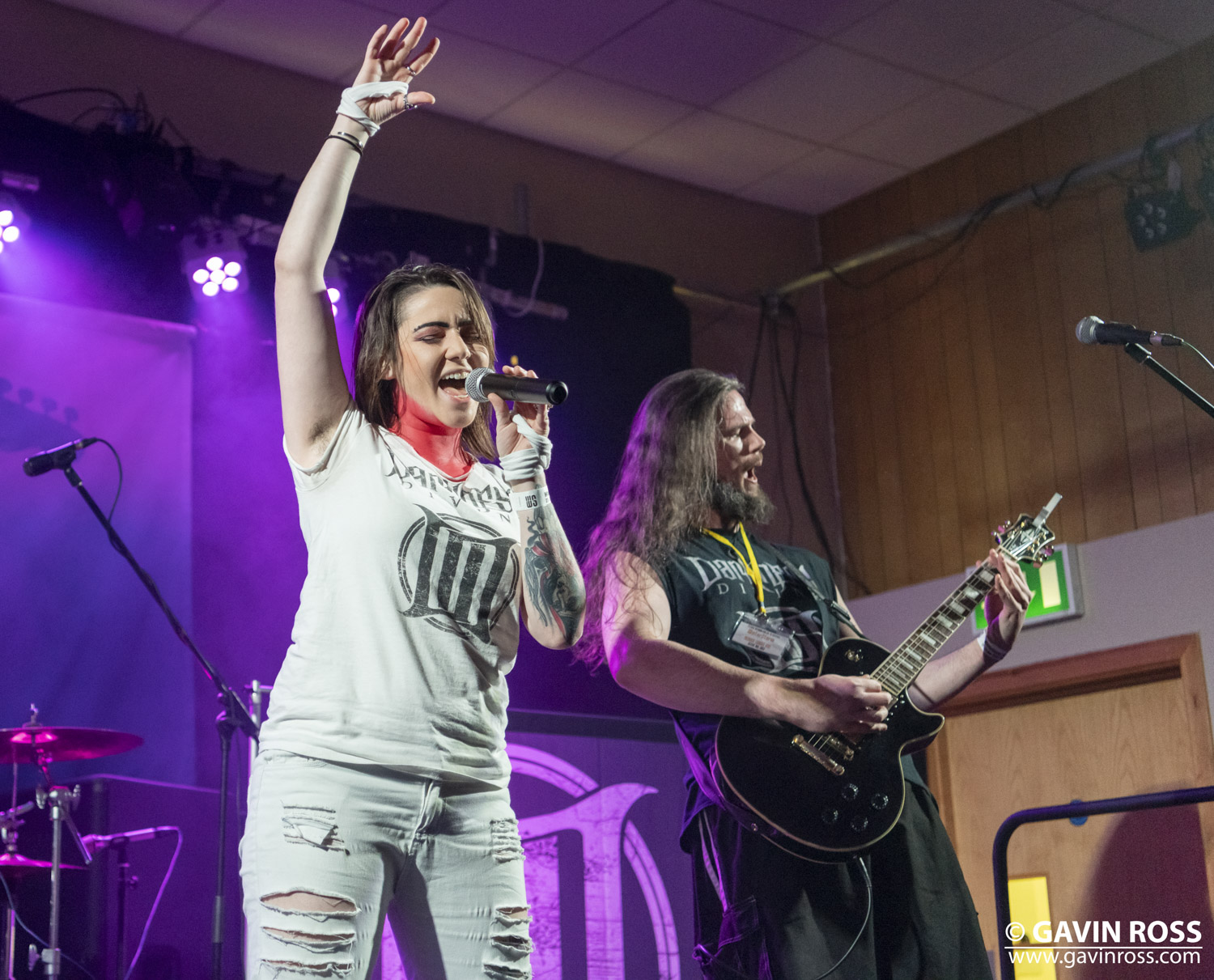 On Friday I manage to catch Glasgows DARKNESS DIVINE who go down an absolute storm and also from Glasgow THE TOI , and one of the best bands about at the moment GIN ANNIE who play to a packed out hall , the first time I have personally seen it there. 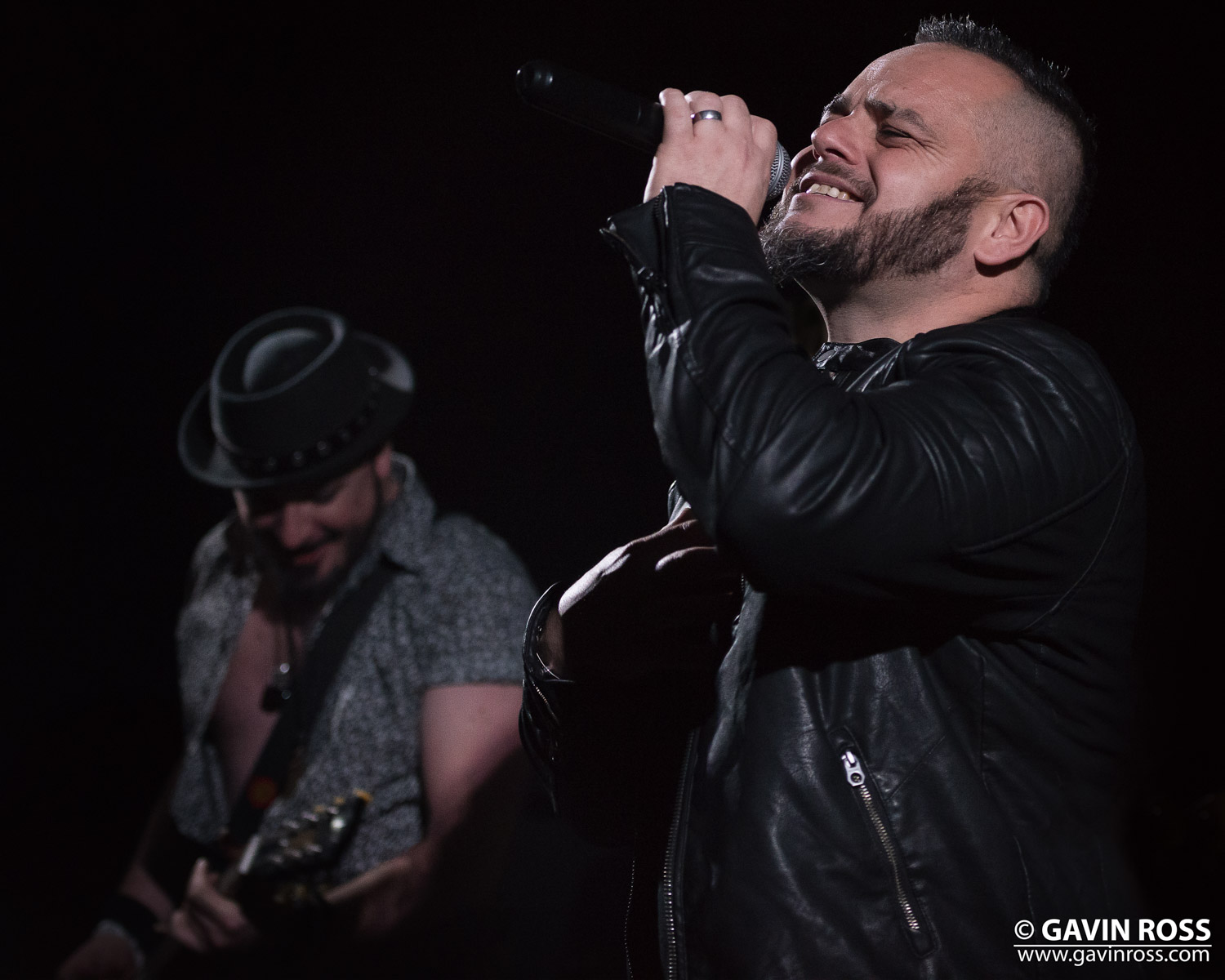 Downstairs I get there just in time to see PETE WAY shuffle onstage with his new band and minus his bass as he is the vocalist in this band and gives us a variety of new songs and old UFO classics. 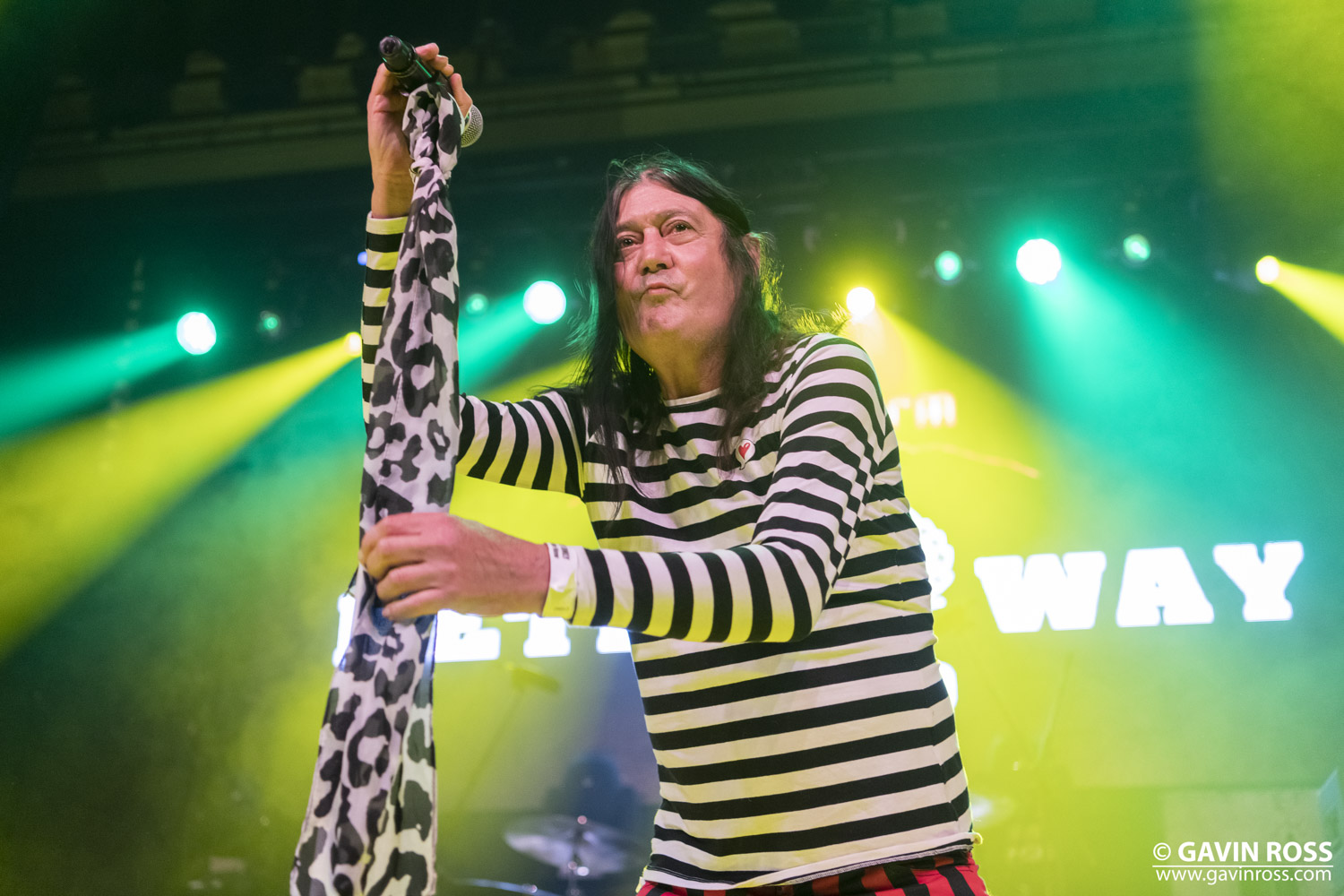 Pete has been ill recently and still doesn’t look too good but I managed a chat with him prior to his set and he was in good spirits and an absolute pleasure to chat with.

MYKE GRAY & KIM JENNETT put on a fantastic set wih Kim in particular extremely energetic and all over the stage and what a voice she has.

DIAMOND HEAD bring their brand of rock onstage and remind us what an excellent band they really are . Founder member and guitarist Brian Tatler looking as young as he did in the 80’s .

As does Steve Overland of FM , second top billing and their second appearance for the band and 3rd for Overland . There are not enough superlatives to describe them and their set list of greatest hits , so Il use just the one , Outstanding.

The crowd want more but the ethos of the festival is no encores which works well .

Headlining today are SKID ROW , they do what is expected of them , deliver good honest rock music and have found a gem in former Dragonforce singer ZP Theart .

All the hits are there , ‘Slave to the grind’ , ‘Monkey Business’ ’18 & life ‘ and set closer ‘Youth gone wild ‘ which sends us home wanting more the next day.

Another freezing day in Troon and first up today are CONTROL THE STORM who won a competition staged earlier in the year to earn a place on the main stage. 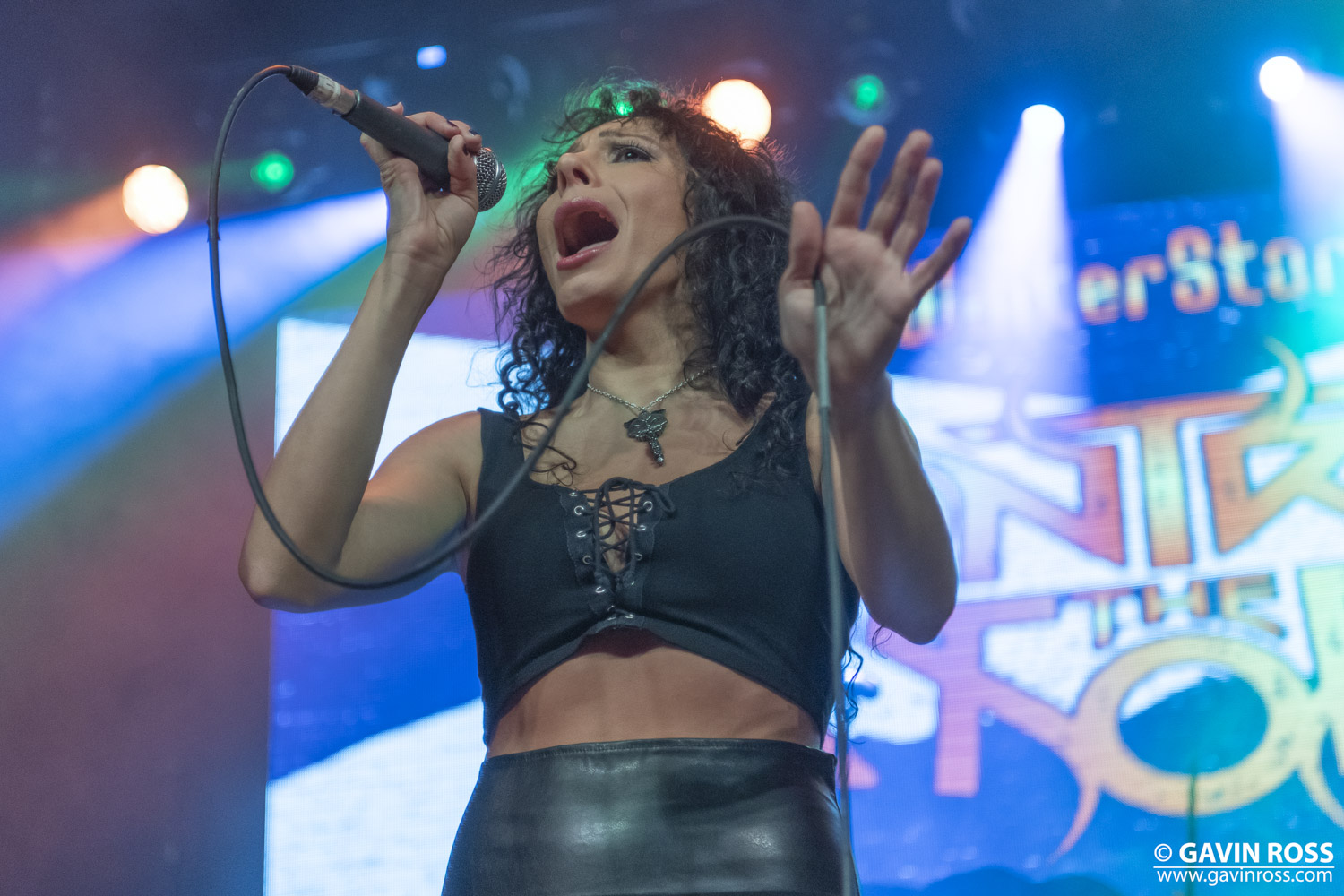 BURNT OUT WRECK are next featuring former Heavy Pettin drummer Gary Moat on vocals. They treat us to simple heads down rock’n’ roll which fairly wakes the already packed out hall up. 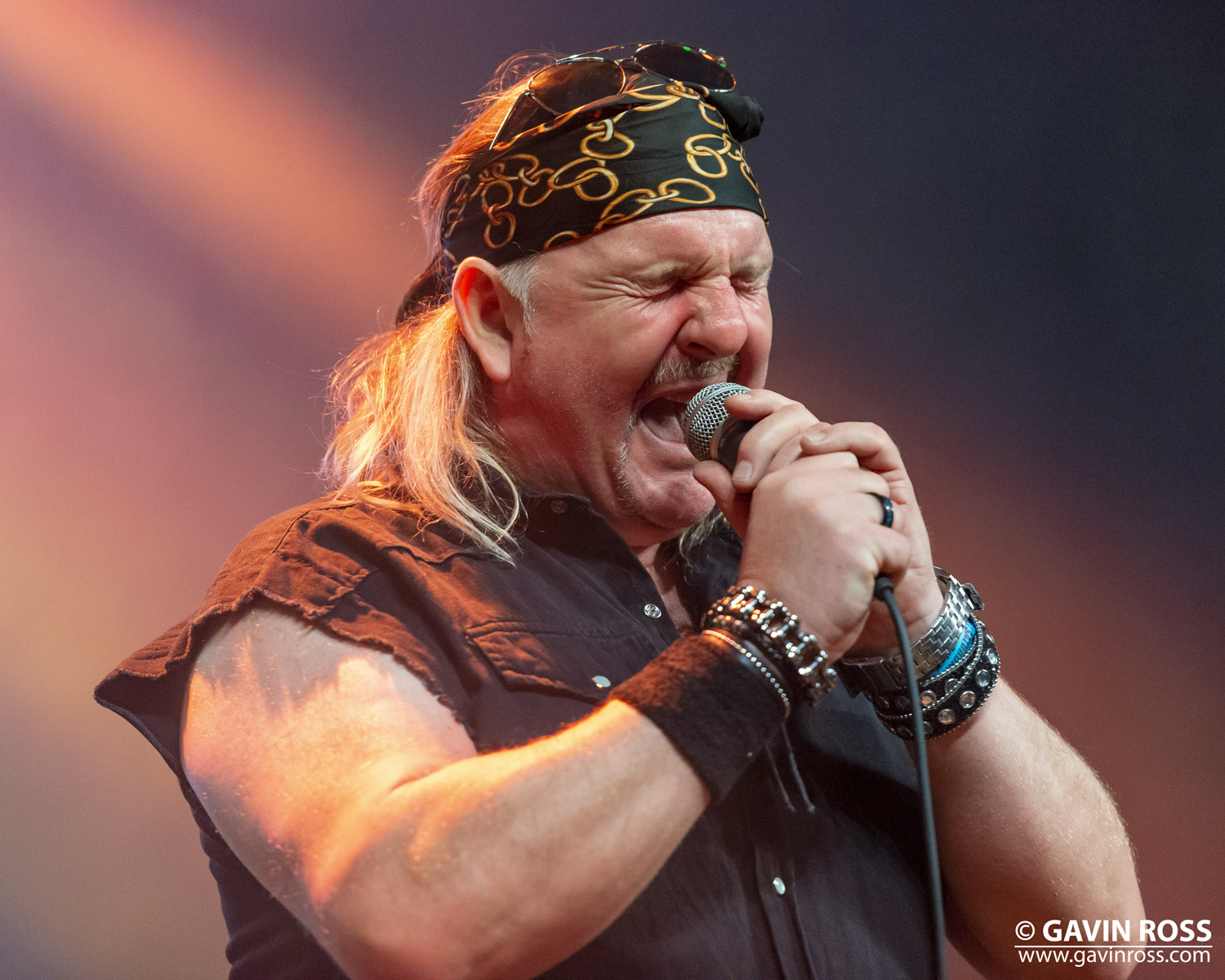 THE BRINK & THE AMORETTES are the next 2 bands on and the crowd love them both , both have excellent songs and no frills exactly what we want to see.

The next 2 bands are both 3 time Winter Storm veterans , firstly PRAYING MANTIS who seem to get better every year.

Vocalist John Cuijpers works the crowd majestically and guitarist Tino Troy has a permanent smile on his face from the first song to the last.

THE TYGERS OF PAN TANG , likewise playing for their 3rd time , have a new album out and it’s a belter . 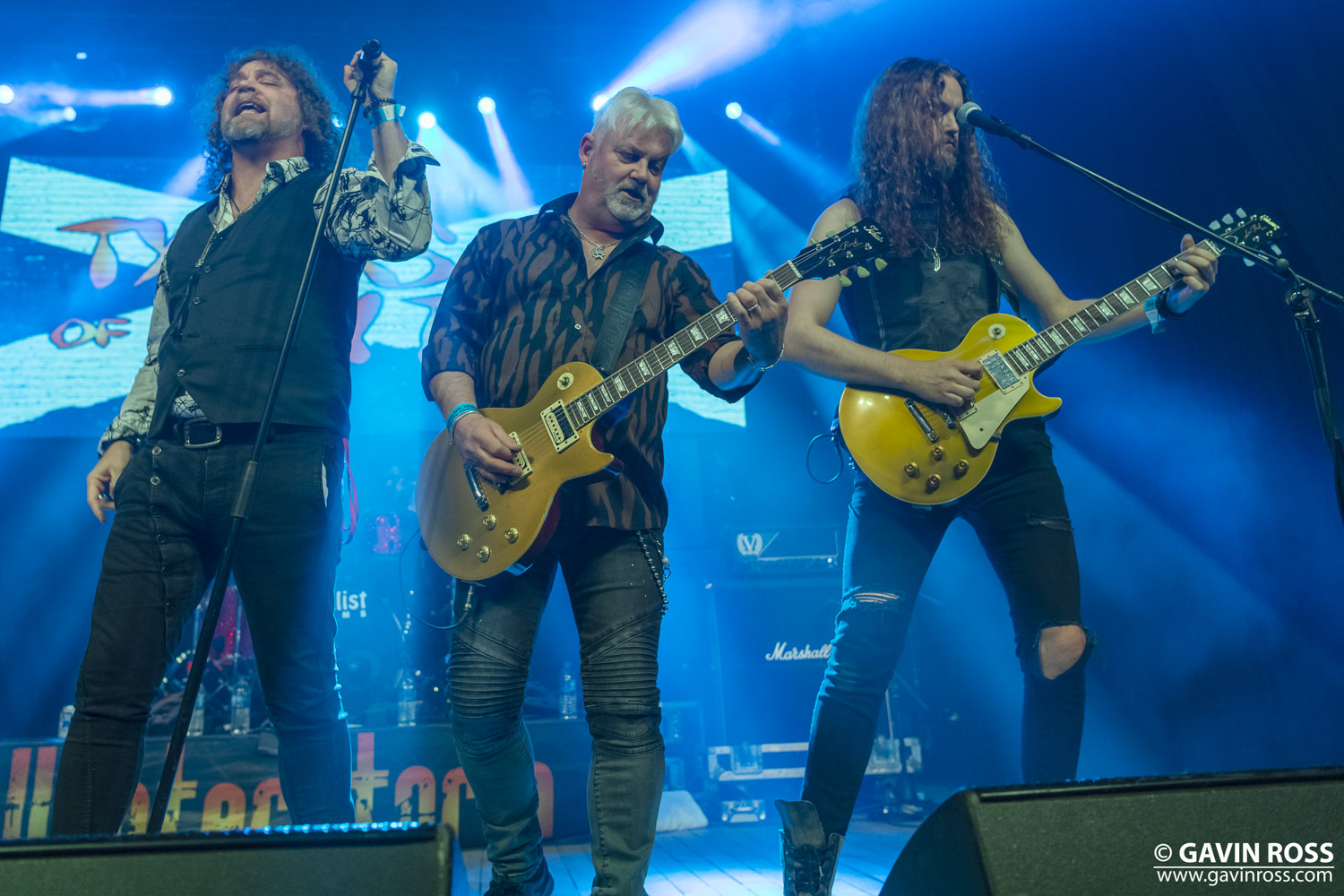 Founding guitarist Rob Weir prowls the stage playing their instantly recognisable twin guitar sound music with a mixture of new and old songs , closing with the crowd singing back to them their most well known track ‘Love Potion No 9 ‘

Former Scorpions guitarist ULI JOHN ROTH’s band take to the stage with Roth resplendent in his now familiar clothing attire and grey locks flowing under his headband and storms through his set . 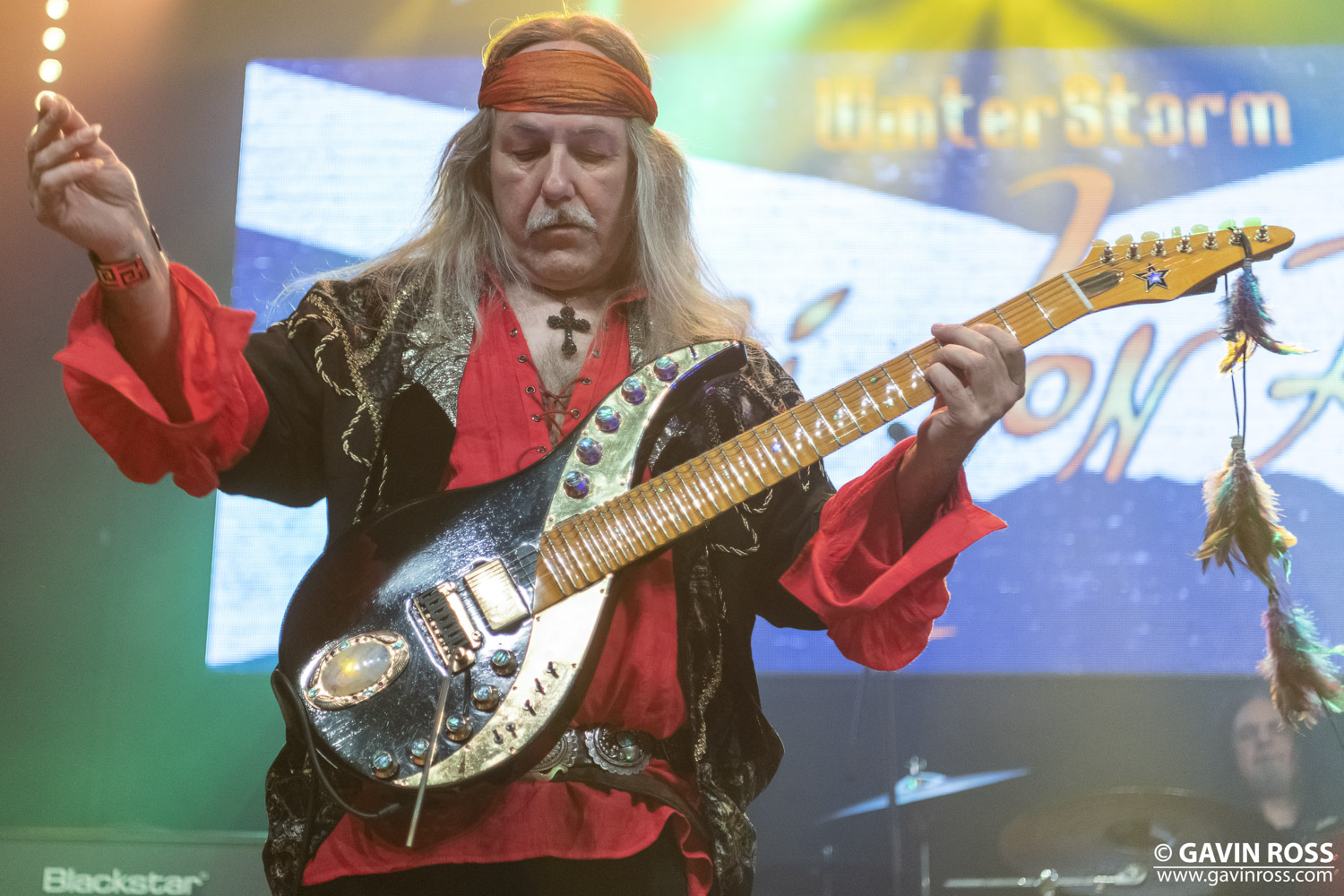 I don’t think I ever remember a gig with so many guitar ‘twiddly bits’ in a set but Roth and his band carry it off with aplomb . 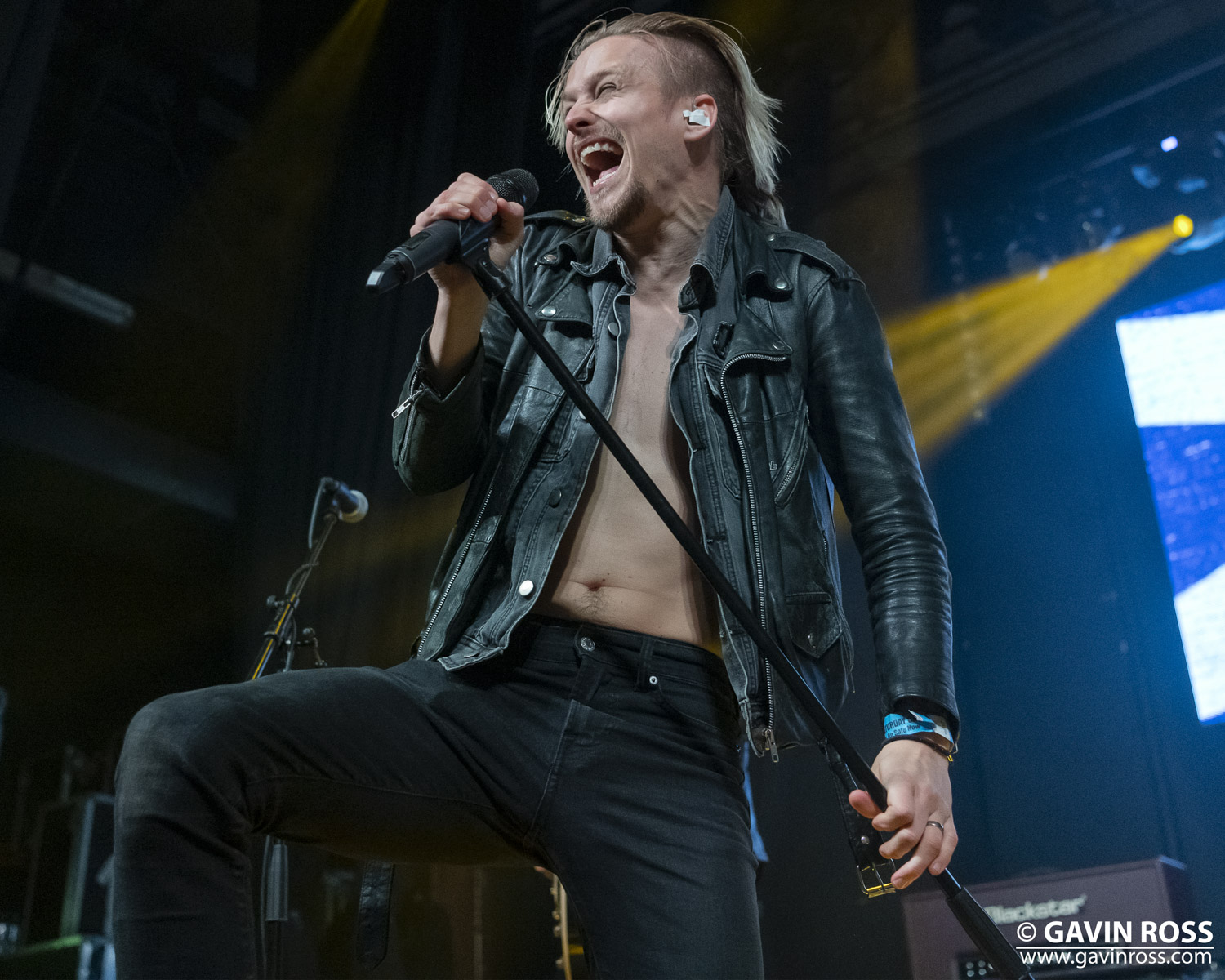 The crowd are loving them as is shown by the lengthy applause at the end of each song.Gronwell finishes the set with a somersault and how he still has energy left Il never know.

Headling tonight are LAST IN LINE , back for a second time having headlined the inaugural Winter Storm.

They really are at the top of their game , Viv Campbell, Vinny Appice , Phil Soussan and Andrew Freeman are simply breathtaking.

We are treated tonight to some original LIL songs and also what the crowd are here for all the DIO classics , ‘Holy Diver ‘ , ‘Straight Through The Heart ‘ ‘Last In Line ‘ , ‘Stand up and shout’ and ‘Rainbow in the dark ‘ all played with the guitar Campbell used in recording Holy Diver. 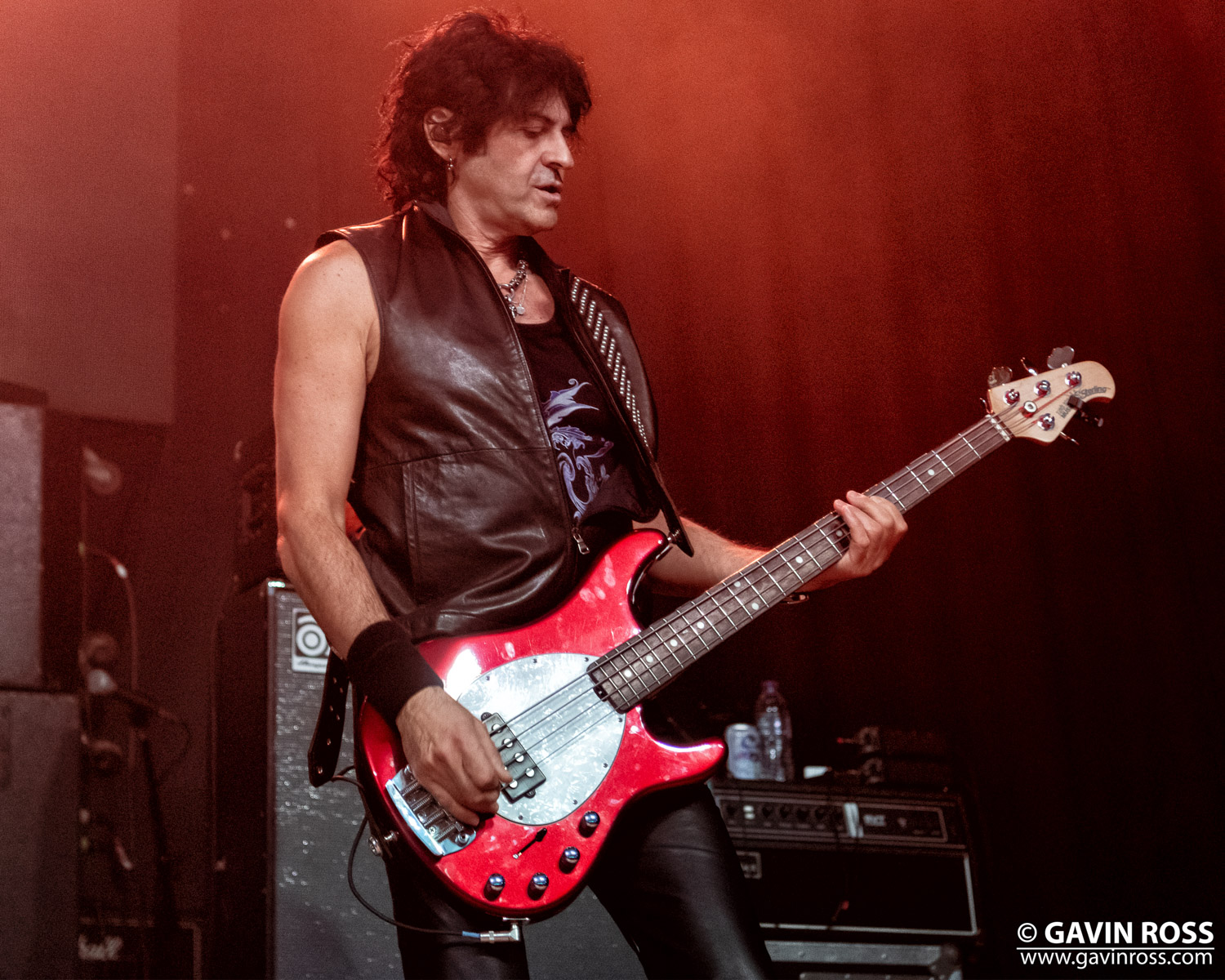 Starmaker ‘ is dedicated to Scotland s own Jimmy Bain the original bassist in both Dio & LIL . Last song of the set is ‘We Rock’ which has everyone singing the chorus at the top of their voices. What a set , what a band..

I managed to catch a fabulous set from Newcastle’s TOMORROW IS LOST on the sessions stage , the band having just signed a record deal with an album on it’s way in March .JOANovARC and MAD HAVEN also put on tremendous sets on the second stage.

The night finishes with the now traditional “Jam “ featuring Chris Glen , Doogie White and Paul McManus and a variety of friends on stage.