How better to start a long weekend of music than a leisurely drive down to the seaside! And even better than that to one of the most iconic holiday ‘Camps’ namely Butlins.

This is the third time I have covered this event and I add it to my calendar as soon as the previous one has finished as it is always one of the best music weekends you could have. Punters and media agree, the facilities are amazing, the fans are welcoming and the staff friendly but what brings everything together is the mastery of music and the diversity of the bands appearing over the entire weekend.

Spread across three stages, one for Introducing, Reds and Centre Stage, the programme is full on from afternoon to the early hours of the morning.

MATT MITCHELL AND THE COLD HEARTS opened on the Introducing stage with an outstanding set of high energy, dynamic rock’n’roll which hit the spot with those assembled early for the exploits.

The winner voted for by those in attendance get to play the main stage the following year and as it was early and despite such a cracking performance a return next year was not to be.

The band are tight as and Mr Mitchell himself is a total professional in his song writing and delivery. Loved the set!

WHITE RAVEN DOWN what can I say? Classic sounding Rock with a melodic overtone from vocalist Bill and piles of driven riffs from Stu Bailey’s guitar

Throw in the low line from Luke and the consistent skin thumping from Tomas and I don’t think music can get a whole heap better.

The band are going from strength to strength and rightly so with class songs such as ‘Not Alone and ‘Take Me’.

They won the vote from the crowd too and we will see them next year on the main stage. Well done! Worthy winners.

VERITY WHITE exploded onto the stage full of attitude and she delivered a good performance.

The songs didn’t hook me in as fast as I’d have liked, but I can see that the potential is there. I’ll go take a listen as soon as I get a minute as I’m sure I will feel differently but with the quality of some of those before her.

10/10 for energy though! I felt exhausted watching her. One to watch, I really didn’t catch enough of her set to give a balanced opinion so will go and see her and the band again soon.

SUPERSEED from Bristol really let rip with their aggressive sound. With their two pronged attack of guitars, the five piece mix the influences up and at times you can hear punk, grunge, stoner and outright rock all dropped into the melting pot.

Only caught a little of their set but the band were certainly on fire.

ELIANA CARGNELUTTI has so much funk and groove embedded in her music which pulsates below the outright blues riffs which rampage through her sound, her vocal sits alongside the skill and I found myself downloading her album the next morning.

I only managed to catch a couple of songs which was a shame as I think the lady has some serious talent.

The Reds Stage opened at 8pm with last years Introducing stage winners SONS OF LIBERTY. The band certainly used the big stage well and the looks on their faces said it all – total enjoyment to be playing to such a large crowd.

I’d seen the guys a few times over the summer and have to say this was one of the best performances I’ve seen from them.

MIGUEL MONTALBAN & THE SOUTHERN VULTURES I was totally unfamiliar with. The Chilean guitar wizard certainly grabbed my attention opening the Centre Stage with the intricacy of his playing and the catchiness of the songs. 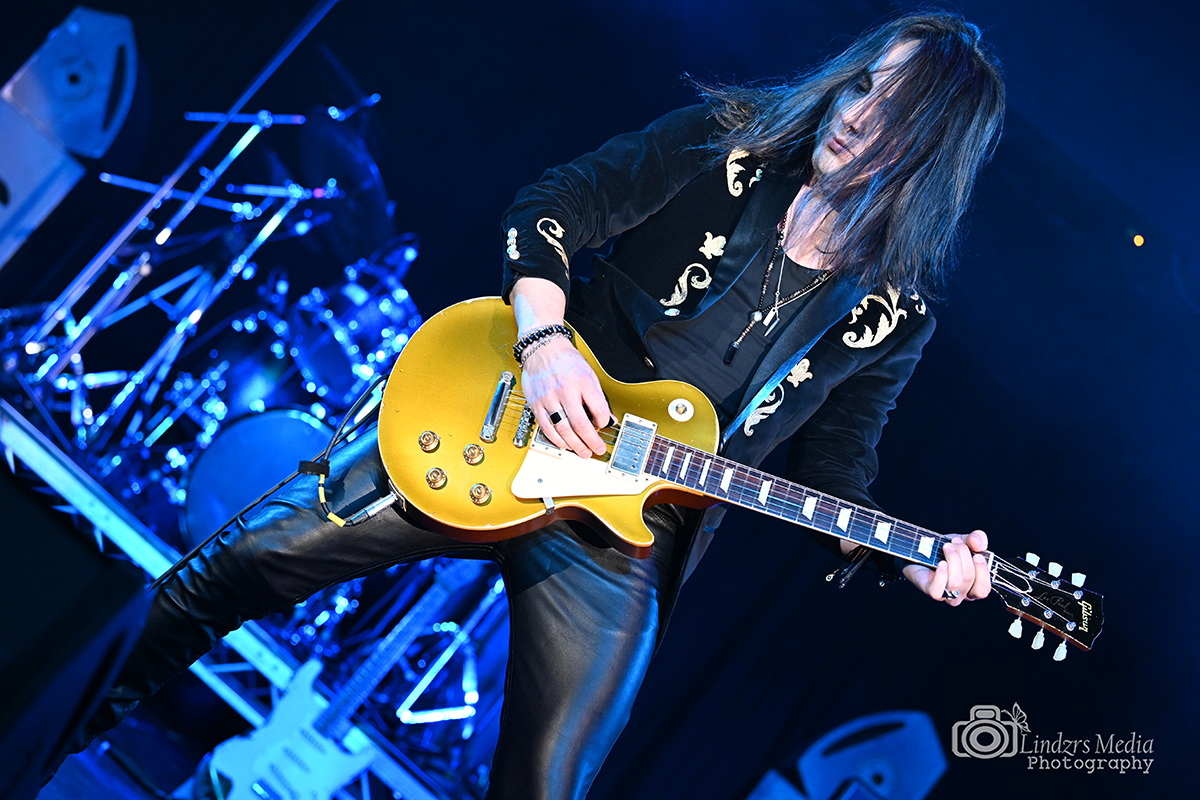 A sparkling array of blues perhaps more suited to a blues weekend but it was very enjoyable and the appreciative audience thought so too.

THE CRAZY WORLD OF ARTHUR BROWN. Iconic, yes but do I get it? No – sorry and I will probably be tarred and feathered for my opinion but I didn’t see it as a performance or a prog masterclass as some seemed to.

I found it boring, strange and just not my thing. Reds was packed out for him though and many really do love the guy but I found my interest had waned after one song and I retreated for a cuppa.

A late addition to this years’ line up was the always popular OLIVER DAWSON SAXON. Do these boys know how to rock? From the first chord the crowd sang along, fists in the air reliving those early Saxon years and it really was one classic song after another.

Graham Oliver, eyes closed, head back, living the riffs, totally engrossed in his playing as always. Dobby Dawson flooding out the sound with his relentless bass, Paul Oliver assisting him in the rhythm stakes on drums, Gav Coulson ramping up the riffage but frontman of the day has to go to the fabulous Bri Shaughnessey who can not only belt out the songs but hold the crowd hostage with his wit and banter.

A lesson delivered in professionalism and entertainment.

JOHN VERITY and his Band always pack out the room and hearing the clarity and power that comes from this amazing man together with his intricated and expressive guitar playing always blows me away totally.

The Duck sat proudly on the amp, now so integral to the festival itself. An astounding career and some incredible songs, I was so sad to have to drag myself away to go and check out Mr Bickler on the centre stage.

DAVE BICKLER, the former Survivor vocalist had toured a few dates in the UK last year and I was looking forward to seeing him again but conscious that John Verity was still on stage.

However, more than ably supported by some of the finest musicians the UK has to offer in Jim Kirkpatrick and Glenn Quinn on guitars, Dominic Hill on bass, Bob Richards, drums and Marco James on keys, the choice of moving to the centre stage was a very good one.

The atmosphere around the centre stage arena was electric and so was Dave’s performance. A step up from last years short tour, Bickler appeared relaxed and enjoying himself.

He comes across as a lovely guy and the packed out centre stage arena thought he was too not to mention talented. How could you not enjoy the songs, his own material as well and probably the song of the day, although sung originally by Jimi Jamison, ‘Burning Heart’, well I got goose bumps, a lovely tribute to the late great Mr Jamison.

Eye of the Tiger’ is the one everyone wanted to hear and looking at the fists in the air and everyone singing along must have been like a flash back for Bickler. A fabulous way to close out the first day of Giants of Rock with a true Giant of Rock.